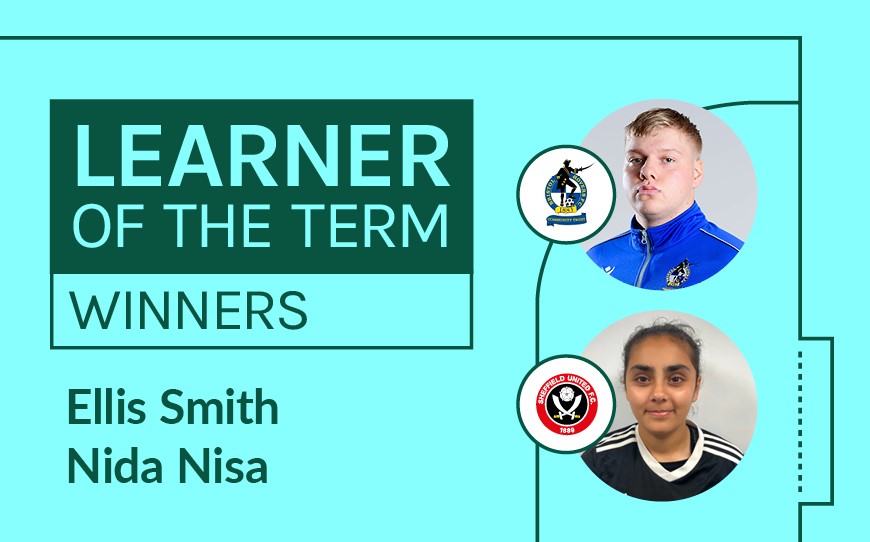 LFE’s Learner of the Term celebrates the efforts of students who have made excellent academic progress and a positive contribution at their club. On this occasion, two winners will share the prize, with both earning a certificate and £150 Amazon voucher.

Ellis completed his two years of study at Bristol Rovers Community Trust last month having been a model student in and out of the classroom.

After suffering several difficult years academically prior to joining the programme, the 19-year-old has enjoyed an outstanding upturn in fortunes and is predicted to graduate with D*D*D* grades on the BTEC Extended Diploma.

“Ellis’ journey has not always been plain sailing and his fantastic grades are made even more remarkable due to his previous journeys within education,” Tutor Sam Rushworth told LFE.

“He was expelled from mainstream high school in Year 8 and spent the rest of his education up to the age of 16 in a special behaviour improvement school. Once Ellis completed his GCSEs, he went on to attend two other local colleges and found the transition difficult, which resulted in him being expelled from both college providers.

“Ellis then enrolled onto the BTEC Level 3 course here at Rovers and within a short time found himself achieving some good grades and beginning to integrate into the programme after a good trip away with NCS.

“He has worked hard for his final grade and also on himself too, by always meeting deadlines early, having a great attitude to learning and high attendance, plus showing massive improvements with his swearing.”

Keen to help others improve their own academic pathway, Ellis has used his interest in boxing as a mechanism to engage with young children experiencing difficulties in education.

Rushworth continued: “Ellis was a learner on our boxing programme, in partnership with Empire Fighting Chance, where he trained three times a week. He has previously been selected to train with the professional fighters and is looking to start his amateur career very soon.

“Ellis decided to start volunteering by running boxing sessions at Empire Fighting Chance for young children who find it difficult to cope in mainstream school, while he has also delivered sessions with us at the Community Trust on our sport projects.

“Additionally, he has enrolled onto his FA Level 1 Coaching course and achieved a boxing qualification, too. Ellis has now accepted a place onto our sports coaching degree, where he will continue his education journey within sport and with us here at Bristol Rovers Community Trust.”

Nida was identified from the start of her programme as a bright and intelligent learner, but she really struggled to engage during her first year and faced some barriers to learning.

She was easily distracted and had a poor attitude to learning in the classroom, however, Nida made a complete U-turn in all areas as she moved into year two, including her behaviour, attitude and her methods of study.

Nida started to demonstrate a mature outlook, which saw her enjoy a tremendous second half of the programme, becoming much more productive in her independent study and being a proactive and conscientious learner with aims for university.

Jenna Wilson, Education Tutor, told LFE: “Due to changes in travel restrictions as a result of Covid-19, unfortunately Nida has been stuck in Pakistan since Easter and was unable to travel back to the UK and complete her studies in person.

“Nonetheless, we made a plan for how she could still complete her work to the high standard she had been achieving at the start of the second year. Despite her being stuck in Pakistan with no Wi-Fi, and not being able to do her work online, she continually kept in touch, communicating at every opportunity.

“She was never once behind with her assignments and met every deadline I set for her, even though she had to hand write everything. Nida was then able to send her work via photos, which I could mark and upload on her behalf. This took a mammoth effort on her part and a lot of motivation. Other learners would have given up, but she never did!

“Nida could have made excuses, but she didn’t, she just kept going. Even when the deadline dates were altered by the exam board, she still continued in the same way and always completed her work to Distinction standard, as per her target grade. This kind of resilience is what we try to promote at the foundation and she has been a credit to herself, despite her difficult circumstances.

“As a result of completing her qualification and achieving far in excess of her target grade, with a D*D*D* after a target of D*DD, Nida has been accepted onto her first-choice degree programme – Applied Sport Science at Northumbria University. I am proud of how mature Nida has become throughout this course.”

Read about this term’s runners-up here.