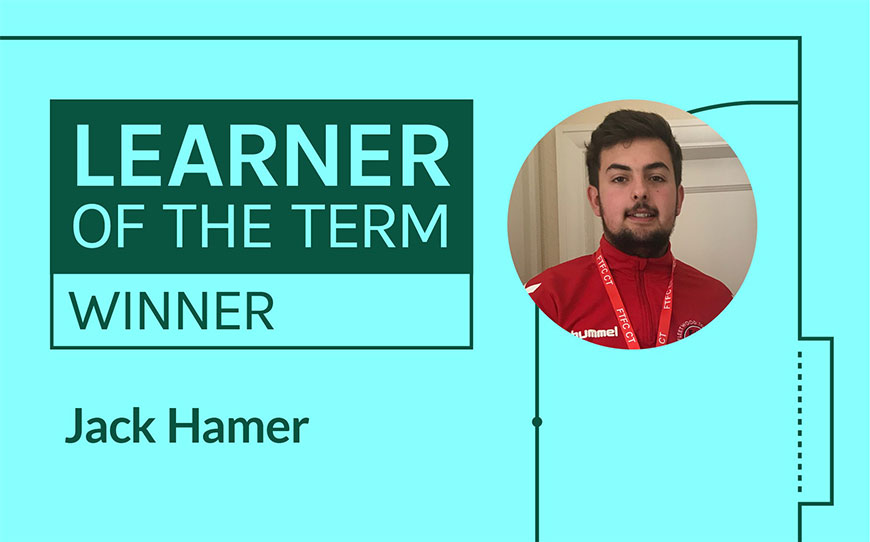 Jack has made great progress, not only in this term, but throughout the year. Despite facing significant adversity, he has been a high achiever in the classroom and starred as a member of the student council.

In addition, he has secured a conditional University offer and already gained two work experience placements under his belt, from which he received excellent feedback from his line managers.

Senior Lecturer Laura Went told LFE: “Jack is an integral member of the college and mentors the first years with student life on and off the pitch. He is also an essential member of the student council and takes a key leadership role within this to assist the promotion of welfare and enjoyment to all students on our course.

“Unfortunately, Jack lost his mum on Christmas Day 2019, which was a great loss to his family. He also lost his dad a few years ago and is now currently residing with his sister. Jack has shown great motivation, hard work and resilience during the pas term since the devastating news and has done incredibly well with his studies.

“Not only has Jack received distinction marks on the four units he has completed in the term, but he also excelled within his work experience module. He undertook two weeks of work placement, one within the Community Trust and one within the Fleetwood Town scouting department.

“Jack impressed during both placements and even managed to gain a part-time job role within the scouting department, which has enabled him to have a distinct focus for his career progression.

“As well as excelling throughout his academic work, he also balances student life with two part-time roles, showing great time management which does not affect his attendance or punctuality to the course.

“Jack has now applied to undertake his foundation degree through the University of South Wales and has successfully been offered a conditional offer on the course. I believe that Jack has really excelled this term through his terrific work ethic and has shown he has excellent resilience skills to not allow his hardship to affect his studies.”

Read about this term’s runners-up here.