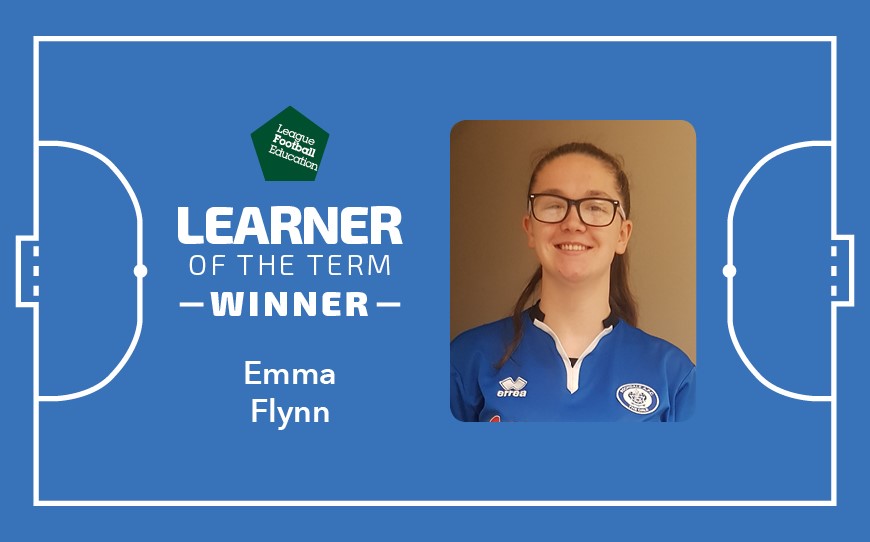 Emma has been a standout student since joining Rochdale in September 2017, consistently achieving merit-distinction grades throughout her time on the Study Programme.

Having completed her UCAS application, she has received offers from all five of her choices and has also been offered a coaching apprenticeship by Rochdale AFC’s Community Trust.

In addition, Emma has completed her FA Refereeing qualification and achieved her FA Level 1 Coaching award, while she also plays for Rochdale AFC Ladies and volunteers to work within the Trust and with the children’s clubs during her half term breaks.

Her impressive success has come despite facing significant adversity, with her mother being diagnosed with cancer at the start of the academic year and sadly passing away shortly before Christmas.

Tutor Shireen Galen-Bisping told LFE: “Emma has achieved so much during her time here and she has grown into an exceptional young woman. She has had to deal with many personal problems, yet did not let her studies or attendance be affected. Her attitude is outstanding and her strength is inspirational.

“NCS (National Citizen Service) was offered to Emma during November 2018 when her mum had just passed away, so I did not expect her to take part. However, she insisted on going as she wanted to make her mum proud.

“During the NCS trip, Emma challenged herself and was an absolute pleasure. There were certain activities which she was fearful of at first, but she always dug deep and found the courage to attempt and complete them, even helping others throughout. The club offered Emma support and she was also advised and offered to take time off, but she did not and instead worked even harder.

“She is always keen to gain as much experience as possible to help her achieve her career goal of becoming a successful female football coach and Rochdale AFC Community Trust are excited to have her on board next year.

“Emma is a true example of a young woman who has strength, resilience, goals and the desire to achieve them.”