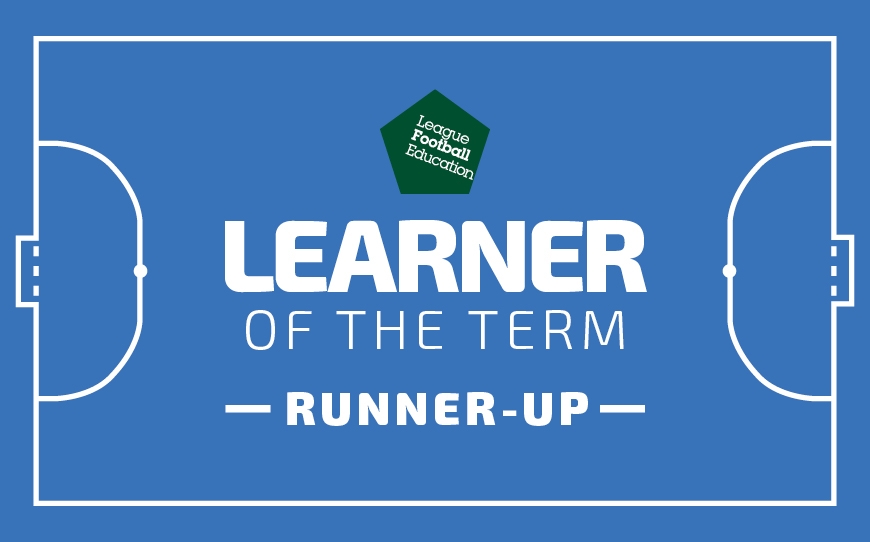 Students have received recognition for their excellent academic progress and positive contribution at their club by making the shortlist for LFE’s Learner of the Term for January to April.

Here are the runners-up for the main prize:

Education Officer Elizabeth Regan and Futsal Development Officer Mark Lynk told LFE: “Jamie joined us in September 2017 and has displayed a high standard of work from the outset, moving onto the Extended Diploma at the first available opportunity.

“He has always been excellent at meeting his deadlines and challenges himself in every assignment to achieve the best possible grade, usually attempting and achieving Distinction level. He always uses his independent study effectively and has scheduled times for himself when at home for completing his extended units.

“To help him achieve these grades, Jamie has had an outstanding 100% attendance and punctuality record over the two years of the course. In the classroom, Jamie is always happy to get involved in group work and discussions. Drawing on his knowledge from studying GCSE PE, he is always willing to try and answer questions in class.

“He is also just a friendly, polite and easy to get along with young man. No matter who he sits with or works with he gets along with everyone the same.

“Jamie brings the same attitude to the pitch for training and matches. He will follow instructions and push himself to improve and learn new ways of playing the game of Futsal with a positive attitude and encourages team-mates to do the same. Jamie started off playing for the Development team, but due to his hard work and dedication he soon got moved up to play regularly for the National team.

“At the start of this academic year Jamie participated in the NCS Programme and this really challenged some of his fears. He pushed himself to participate in every activity and also helped encourage and motivate his peers in the different activities. His organisation skills helped his team in Phase 3 to find and deliver a successful project in the local community.

During his second year of study Jamie has taken it upon himself to prepare for a future career in coaching by sourcing and completing his FA Level 1 Coaching Award. As well as this, he has been regularly coaching in the evenings and at weekend matches at an Under-14s level.

“He has been working with other coaches to learn and develop his coaching skills to help him for his plans for his future career. And in addition to all of his coaching, Jamie has been learning how to drive and just passed his practical test.”

BTEC Tutor Joseph Newson told LFE: “Luke has shown excellent attendance, punctuality and attitude over the last term and as a result was rewarded with the opportunity to shadow the first-team Analysis department at the club for a day.

“He really impressed during the day, with the club commenting on his attitude to listen and learn and as such have provided Luke with more opportunities in the form of a full-time work placement when his timetable allows.

“This has been mirrored with consistently achieving high grades, as well as offering his support to the first-team and academy on an analysis basis.”