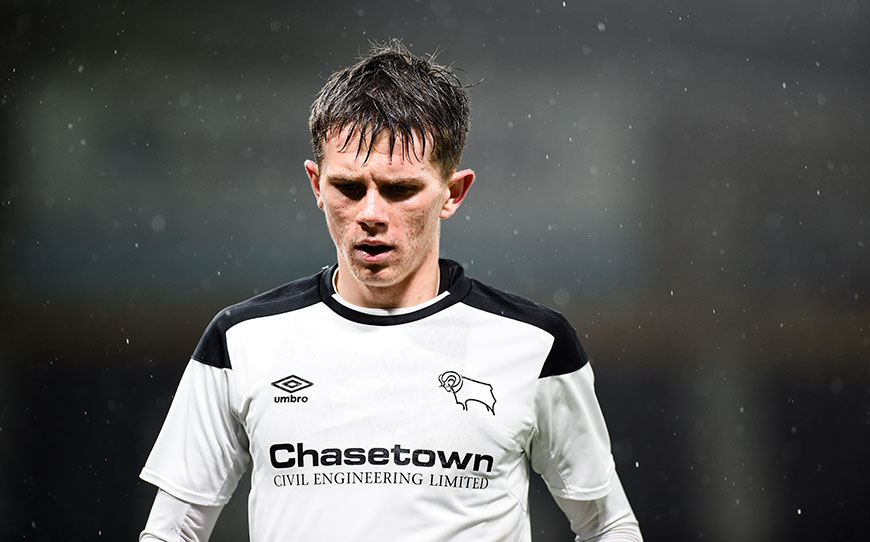 Derby County’s Max Bird has made himself the benchmark for young footballers across the country.

From a selection of almost 1,200 Academy players, the 18-year-old was the standout candidate to receive the distinguished LFE Apprentice of the Year award, being honoured for his exceptional efforts as a player, a student and a person.

He told LFE: “I couldn’t have wished for much more. All I can do is thank everyone at the club, players and staff from the Under-18s through to the Under-23s and the first-team.

“It’s a proud moment for me to join some big names on the list of winners and as long as I follow their footsteps and keep improving, that’s all I can hope for.”

The signs that Bird would be a high achiever were evident from the very start of his apprenticeship in July 2017.

Within four months, the talented midfielder had earned his first-team bow in the Carabao Cup, penned a three-year professional contract and been named in LFE’s ‘The 11’ having immediately struck a healthy balance between his football and academic responsibilities.

“Most lads probably don’t particularly enjoy the college part, but I think it’s good for us,” said Bird. “It keeps your brain working in a different way and it’s important to have additional interests so that your mind isn’t constantly on football.

It widens your range of knowledge. Football is a very physical activity, but it’s also mentally demanding at times and you need to have other interests away from the game to deal with that.

“When you’re at home, you’re not thinking about football all the time. You have to have a certain level of motivation and drive to be the best you can be but you need interests outside of the game to keep you mentally right.”

Due to his commitments with the Under-23s and the first-team, Bird decided against studying the Extended Diploma, but has already organised arrangements to continue his studies next season in order to achieve the extra units.

The Rams starlet has also benefited from the club’s substantial Life Skills programme, designed by Head of Education & Welfare Simon Ord, which has covered a range of topics such as addiction, driving awareness, financial advice and emotional well-being.

He continued: “The college work and the sessions we do with Simon are very important. Simon’s a big part in me winning the Apprentice of the Year award because it’s not just on the pitch, it’s off the pitch as well.

“We’ve done sessions on Friday mornings looking at life skills, how to manage different things and also more team-bonding activities. There are plenty of stories out there of footballers suffering with gambling or addiction as well.

“We have had former players coming in and speaking to us about how to prevent yourself from being involved with that sort of thing. As a footballer, you can have all the money in the world but you can lose it with the click of a finger if you’re silly with it.

“When you come into the Academy you start getting paid and ex-professionals have spoken to us saying that they gambled away their first pay cheques, so it’s important we hear about this at a young age because we can learn to take care of our money and identify the consequences of addiction.”

Bird has also immersed himself with community and charity work, contributing to the club’s Shoe Aid project and using his FA Level 2 Coaching badge to deliver sessions with local primary school children.

This leadership in the classroom and in the community has seen the second-year apprentice transfer those skills onto the pitch, where he was given the Under-23s captaincy despite being one of the youngest in the group.

“The primary school came in and we created a sports day theme,” he said. “We split them up into little groups and had different stations of dodgeball, throwing and catching and various football games.

“The kids seemed to enjoy it and it’s good for us as apprentices to be able to use our coaching skills that we learned from the qualification and also to become role models to them, to inspire them and make them smile.

You’re not just here as a footballer, you’re here to become a better person. You’re here to learn off the pitch as well as on it.

“We’re very fortunate to come in here and have your kit laid out, boots cleaned, food provided for you and all that, so it’s important that you give something back to the community and those less fortunate.

“The first-team go to different events and we can learn from them and start early. You learn how to talk to people. You learn that punctuality and humility are vital. The transition into higher age groups is harder for some players than others and it’s important that you learn from people who have done it before and evaluate how you can approach it in the best way.”

Bird is not the only player to improve as a result of Derby’s focus on personal development. The Under-18s topped the Premier League North division, seeing off the likes of Manchester United, Manchester City and Liverpool, before beating Arsenal to become National Champions. Meanwhile, the Under-23 side reached the quarter-finals of the Premier League Cup.

“It sort of links to what happens on the pitch. You become a really tight unit as a team and you build a common competitiveness and togetherness that is taken out onto the pitch,” he added.

“In previous years I think we’ve seen groups gel slowly over the course of a season, whereas this year, with all the different sessions and meetings that we’ve had, it’s sped up that process and helped the team a lot in improving results.” That team unity was in full display recently when Bird’s father sadly passed away at the age of just 45 after a short illness, with the highly-rated teenager showing his tremendous strength of character and receiving the utmost support from his peers.

And in the weeks that have followed, Bird was handed his full EFL debut away to Aston Villa and signed an improved deal to keep him at Pride Park until 2022 before collecting the Sky Bet Championship and Overall Apprentice of the Year awards.

He said: “The support that I’ve had around the whole football club has been unbelievable – from the coaches and players from every age group – they’ve been brilliant with me.

“It’s been a tough time and it came as a shock, so to have all the support and be able to keep pushing to be a better player and break into the first-team has been amazing.

“I do my college work or I go in the gym and it’s just a great place to be, being surrounded by your mates. It keeps me going and I love coming in. It’s not something you can take your mind off but the environment I’m surrounded by here gives me a chance to enjoy myself and do what I love.

“I’m glad that I could pick up the award to do my dad proud and make him happy, but also make my family happy – my mum and my brother as well – but especially my dad, who hopefully will be looking down and be proud of me and all I need to do is continue to do that.”

Manager Frank Lampard has also been a major influence on the impressive youngster since his arrival last summer.

Bird said: “I have to pinch myself because of what he’s done for me and the times we stay out after training. I can only thank him for what he’s done and the impact he’s had on me. The drive that he’s given to me and the motivation… he’s a role model to me.

“Having watched him when I was a young kid and seeing him playing the way he did and then for him to be managing me, it’s a dream come true. There’s no better person to learn from than Frank Lampard.

“I want to be learning from him all the time, whether that’s staying behind after training or asking him questions about the position you play, what you need to do to improve.” Meanwhile, Lampard hailed the attitude of his young prodigy and admitted he has high hopes for Bird to follow in the footsteps of recent Academy graduate Jayden Bogle in establishing himself as a first-team regular.

The Chelsea legend said: “Max is a really good young man and an excellent young professional here at Derby County. He wants to learn and take in information and, ever since the first time I called him up to train with the first-team, he has been impressive.

“Max has made that jump this year and handled it really well. You have to have the right character and humility to make that step up and a real desire to work hard and it’s clear to see he has that. With the ability Max has got and how he goes about his work, it’s only a matter of time until we see more of him in the first-team.”