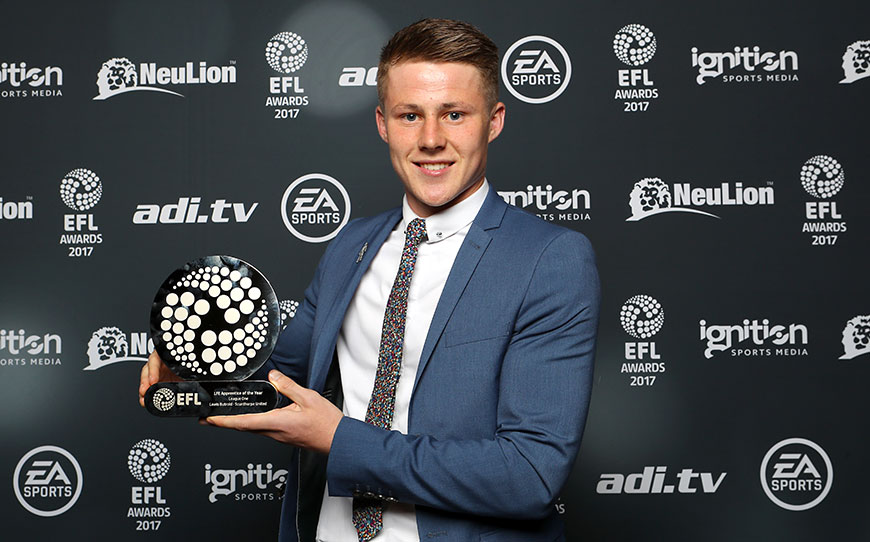 A decade on from joining Scunthorpe United, Lewis Butroid was named the LFE League One Apprentice of the Year at the EFL Awards in April.

It has been quite a journey for the left-back from Gainsborough, who signed an 18-month professional contract in January, with the club he supported as a boy.

There has also been the small matter of a senior debut for the Iron against Middlesbrough under-23’s in the Checkatrade Trophy to celebrate, in what is fast becoming a dream season.

Unsurprisingly for a player with the capacity to run a sub 20-minute 5K as a schoolboy, Scunthorpe’s Under-18s skipper is noted for his lung busting endurance, tenacity, hard work and level-headed attitude.

They are qualities which have served him well so far, allowing him to produce a mature performance that belied his inexperience against Boro and push for further involvement in Graham Alexander’s high flying League One side.

“I was told the day before (my debut) and, from the minute I was told, I was quite nervous and couldn’t really stop thinking about how it was going to go.

“You have all manner of situations running through your head about what might happen on the pitch but it couldn’t have gone any better for me.”

Butroid, who was an unused substitute in the games against Morecambe and Oxford in the following rounds of the competition, has drawn the praise of academy manager Tony Daws, who has hailed him as an example for others coming through the club’s youth system.

“Lewis signed for us as an under-nine, ten years ago now. He made good progress through as a left-back and came all the way through our system,” Daws told the EFL.

“He’s captain of the youth team, displays a terrific attitude, is punctual, a good leader, and motivates his team-mates as well as himself. Lewis made his debut in the first team against Middlesbrough and did really well. He was named man of the match.

“He’s kept a level head and has worked really hard at his game. He’s also working really hard at college at well, which is important. He has a great work ethic and is a player we’re really proud of,” he added.