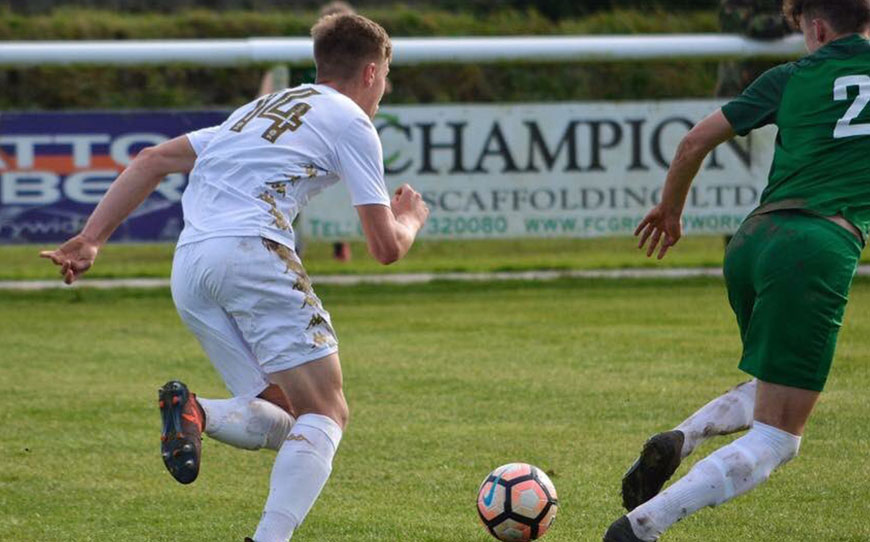 By Joseph Brown: Leeds United Under-18s produced a rampant first-half display to brush aside Barnsley Under-18s in a 5-2 win to send them to second in the Professional Development League North.

United’s Academy Player of the Year Callum Nicell netted twice, while Sammy Amissah, Jack Clarke and substitute Theo Hudson also got on the scoresheet, with a brace from Tom Clare providing consolation for the Young Tykes.

Barnsley arrived at Thorp Arch in confident mood after an unbeaten run of five games and fashioned the first opening when Wilberforce Ocran delivered a cross for Christopher Thorpe to head across goal, but his effort crashed against the crossbar.

This proved to be a wake-up call to the hosts as it was one-way traffic after that, with Clarke and Alfie McCalmont both denied by Barnsley keeper Jake Greatorex before Captain Nicell broke deadlock on the half-hour mark.

Amissah was the creator following a great run down the right flank before crossing towards Nicell, who headed home after his initial effort was blocked by Greatorex.

And he doubled the advantage just five minutes later from a similar move as Amissah again went on a surging run down the right wing and cut the ball across to Nicell to slot into the bottom left corner.

Leeds began to run riot as they opened a three-goal margin five minutes before half-time when a rapid counter-attack concluded with Clarke sliding a pass to Amissah, who had ran into space on the left side of the area and calmly slotted past the hapless Greatorex.

The Whites were not finished there as they added a fourth before the break when a long ball down the left was expertly controlled by Clarke before the first-year apprentice powered into the area and unleashed a vicious shot into the top corner.

The home side continued their dominance after the restart, with Greatorex on hand to prevent Nicell claiming a hat-trick from a dangerous strike from distance, while the Tykes stopper thwarted him again from the penalty spot after Clarke had been brought down by Will Alderton.

Alex Wollerton hit the post before United finally had the ball in the net for a fifth occasion, only for substitute Bobby Kamwa’s rebound to be ruled out for offside.

Barnsley had rarely threatened since their golden opportunity to take the lead early on and they finally had some joy when Leeds keeper Harrison Male fouled Cameron Simpson inside the area, with Clare sending Male the wrong way to reduce the deficit.

However, the Whites responded one minute later when substitute Hudson cut inside from the right and hit a left-footed strike that took a dramatic deflection and rolled into the net beyond the grasp of the despairing dive of Greatorex.

Barnsley added a second to their tally late on through Clare’s second of the game as he converted Bradley Binns’ cross, but the result means Martin Devaney’s side drop to the bottom of the table, although they are just five points adrift of leaders Huddersfield Town.

“We grew into the game and we gave ourselves a great platform in the first half going in with a 4-0 lead at half-time,” Leeds PDP coach Mark Jackson told LFE. “Performance wise, I thought we got a little bit sloppy second half and didn’t continue with the good work we’d done in the first half, with our passing and ball retention and quality, but sometimes that happens in games.”

Meanwhile, Barnsley PDP coach Martin Devaney said: “I’m not going to be too hard on the boys, because the lads have done great. We’ve had five games unbeaten and were probably the in-form in the league.