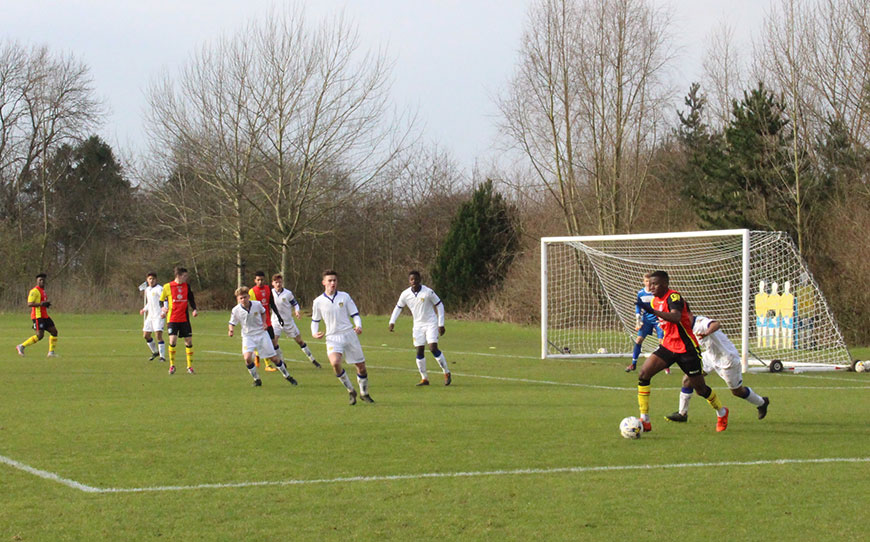 By Calum Nurse: Birmingham City U18s moved up to second in the Under-18 Premier Development League Group 2 North with an emphatic 6-2 victory over a young Leeds United team at Thorp Arch.

Ronan Hale hit an astonishing five goals and grabbed a first-half hat-trick for the Blues who were two goals up inside the first ten minutes.

The movement of Hale and his striking partner Khaellem Bailey, was particularly impressive for the Blues who caused the Leeds defence problems that at times they simply couldn’t deal with.

Birmingham who are ten points behind league leaders Nottingham Forest with two games in hand started on the front foot.

Full-back Charlie Lakin was twice allowed to advance down the left and on both occasions was able to find Hale, who created space for himself inside the area to score.

Hales completed his hat-trick in the 34th minute after Ronaldo Vieira had lost possession of the ball.

The forward then grabbed his fourth goal before the break and hit his fifth goal of the game on the hour mark to register his ninth goal in his last two run outs.

Bailey grabbed the Blues other goal with Ollie Mulders also showing up well for the visitors.

Leeds to their credit did not allow their heads to drop and scored twice themselves after the interval through Matthew Downing and Captain Mike Taylor.

Coach Andy Gray also tried to take the positives out of the game.

“The first half we were really slow out of the blocks. Being two nil down in the first ten minutes didn’t help and we never got to grips with their attack.

“It was a game of two-halves and second half we were the better side. We looked a lot more composed and we’ll take the last 45 into next week.”