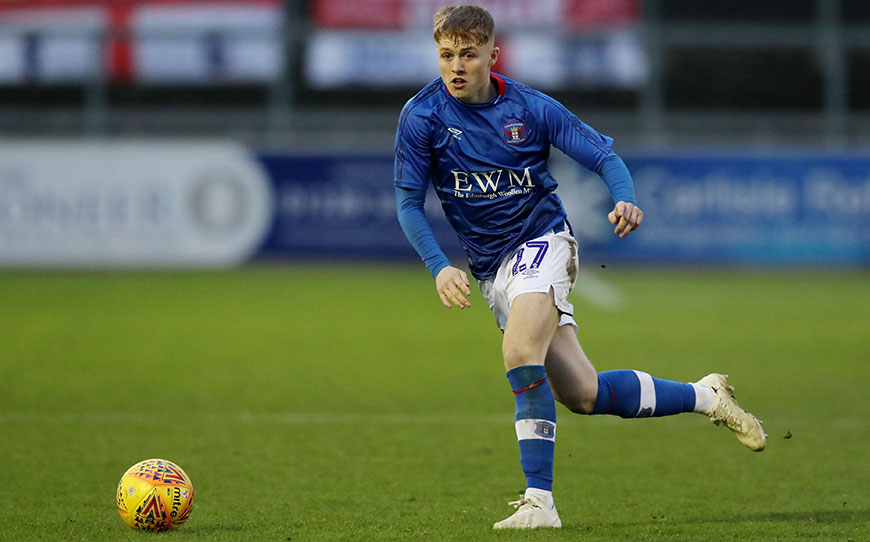 The 18-year-old amassed 20 appearances in the first-team as a second-year apprentice, having made his debut in the Checkatrade Trophy against Morecambe in September.

McCarron signed an 18-month professional deal with the option of a further year, but his impressive senior displays – which included four starts – led to interest from Leeds, who will initially place him in their Under-23s squad.

The exciting youngster told Carlisle’s website: “I’ve loved my time with Carlisle United and I’m leaving with a very heavy heart. I’d like to thank the club for everything they’ve done for me, and it became an even harder decision to make when a new contract offer was mentioned.

“This opportunity has come up and I just feel it’s one I have to take. Carlisle United will always be in my thoughts because I wouldn’t be where I am now without the help and support I’ve received from the staff, the coaches and the fans. I hope the club goes on to get the promotion it deserves. I’ll definitely be celebrating if it does.”

Director of football David Holdsworth said: “This is one of those situations where a big club has identified the potential of one of our young players and has subsequently followed that up.

“There’s nothing much you can do when a club really does start to ramp up their intentions to actually sign the player, whatever age he is, other than let him know that he’s wanted by the club he’s already with and that you see him as part of the future here at Carlisle United.

“Liam is a fantastic young man. I gave him a three-year contract initially, close to the start of last season, because we recognised that he had a really bright future. That was an example of us investing in one of our younger players at an early stage, which is something we have always stated we are more than prepared to do.

“However, this opportunity has come along for Liam and, along with his family and agent, he indicated that he wanted to pursue it. That’s fine, it’s football, so it then comes down to us getting the best deal we possibly can. With that in mind I’ve turned down prior offers and held out for what I and the board feel is an excellent deal for the club.

“I have to say that I’ve built up a good working relationship with Leeds throughout this process and it could prove to be a good fit for us going forward should we want to consider any of their players for loan spells with us.”

“The player genuinely wants to move, we will not stop the move from happening, but we’ve had to do the work to secure what I and the board feel is a very good deal.”