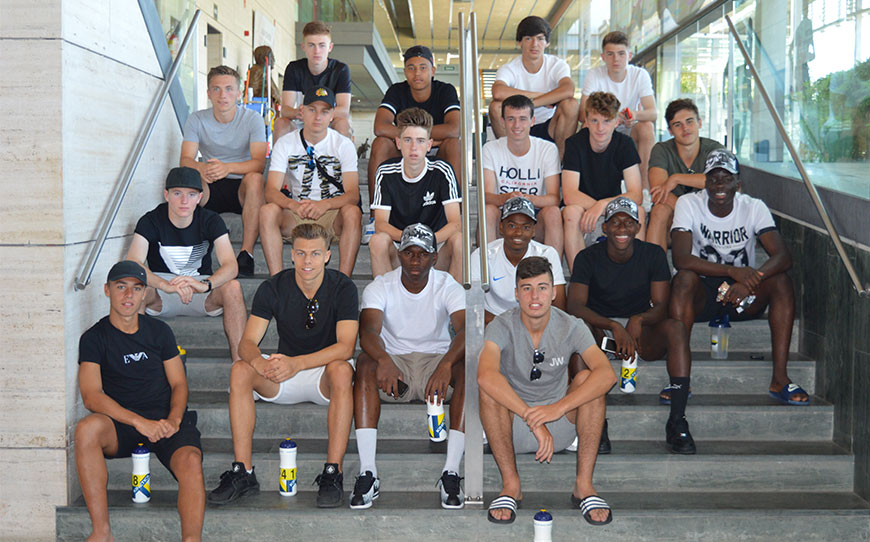 Our first full day in Spain was very enjoyable for everyone as we were able to settle down in the new facility and new environment, which gave us time together as a team to bond.

The first activity of the day was training, led by Atlético Madrid coaches, which was a fantastic opportunity for us. The session was hard at first because of the language barrier, but as it progressed we got to grips with what was being asked of us. In between each exercise, the Spanish coaches demanded that we should stretch for six second to help prevent injuries and any fatigue in our muscles. Following a pool, which we used to allow our bodies to recover, we had a Spanish lesson. It was quite tough to grasp the language, but we were able to learn a few useful phrases in the end.

The second day of training was very intense and the extremely hot weather made it a lot harder for everyone, but we all managed to adapt quite well. We were split into three groups – defenders, midfielders and attackers – and worked separately for 20 minutes with an activity that applied to our position. We then played a few small-sided games, but due to the heat, each team had to try to play the Spanish style of play by keeping possession of the ball so that we didn’t have to run as much. Continuing the Spanish theme, we then ate paella for lunch, which was surprisingly tasty.

In the afternoon, we visited the Spanish Football museum, where we saw lots of interesting things regarding the history of Spanish football, as well as the silverware that they have won in recent tournaments. It was certainly a great experience to take it all in and seeing all the trophies and various great players of the past and present has motivated us to work even harder to get to the top level.

Another Spanish lesson followed, in which we moved onto days of the week – we’ll be fluent by the time we come back! After that, we travelled to Alcorcon for our final training session of the day with their club coaches. As was the case the previous day, the language barrier proved to be a stumbling block at first, but we managed to complete the session with fluidity and consistency.

We returned the following morning for another day of training, where we were joined by Alcorcon’s youth side. It was another demanding session with various amounts of circuit training that we had to perform at high tempo, followed by a 40-minute games against Alcorcon, which was a testing encounter. As we expected, they were very good at keeping the ball and we had to keep our concentration throughout to deny them any opportunities to break us down. To our credit, we maintained our focus and beat them 1-0, which was a great way to start the trip ahead of our set of fixtures out here.

Having returned to the hotel, we had another Spanish lesson, which is now starting to feel like we’re back at school! We began to put sentences together and tried to converse with each other in attempt to understand what we were saying. Later on, we practised set pieces for the upcoming training game against Reading. We spent around half an hour learning new creative patterns and making sure our delivery was correct, before moving on to taking some free-kicks. We then chose to make the most of the hotel facilities by doing a recovery session in the pool.

We then had our game against Reading. We started off fairly slow but eased into it in the first quarter, which ended goalless. Unfortunately for us, the second quarter saw us concede four goals as we lost our concentration, but we regained our composure for the second half, with the game finishing 5-2. It was very disappointing to lose by such a margin but we can be positive with our performance for three of the four quarters against a good team and hopefully we can take that spirit into the second week.