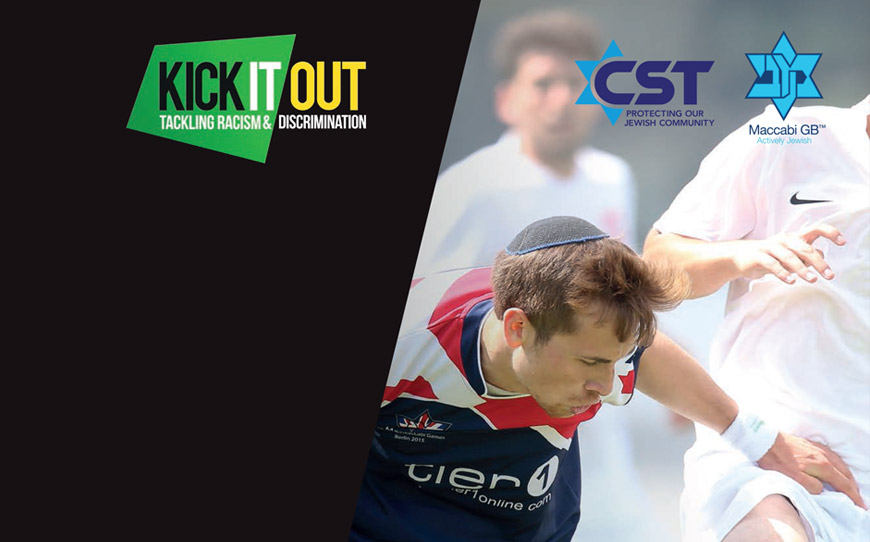 Kick It Out, football’s equality and inclusion organisation, has released a brochure to help provide further information on how the Jewish community can report antisemitism in football.

Created in partnership with the Community Security Trust (CST) and Maccabi GB, the brochure provides details of each organisation as well as how to report incidents of antisemitic behaviour through the appropriate channels.

Titled ‘Playing the game: Reporting antisemitism in football’, the eight-page brochure features comments from Lord Herman Ouseley, Chair of Kick It Out, on the issue of hate crime along with further information on the Fans For Diversity campaign, run in partnership with Kick It Out and the Football Supporters’ Federation.

This brochure is free and can be downloaded from the Kick It Out website.

Roisin Wood, Director of Kick It Out, said: “Kick It Out has been at the forefront of raising awareness on antisemitism and the negative effects it has on the Jewish community within football.”

“The reporting brochure, produced in partnership with the CST and Maccabi GB, will provide greater understanding on the role of Kick It Out, as well as helping encourage reporting of antisemitic behaviour across all levels of the game.”

Dave Rich, Deputy Director of Communications at the CST, said: “Antisemitism should have no place in football. Jewish fans and players are entitled to enjoy their football without having to face abuse and we encourage people to use this guide to report antisemitism.”

Martin Berliner, CEO of Maccabi GB, said, “Maccabi GB is delighted that the issue of antisemitism in football is being addressed by Kick It Out and there is a real conscious effort to eradicate it from all forms of the game.”

“Never before has there been such quick and easy ways to report abuse thanks to the Kick It Out App, as well as the freephone number and website. We are proud to be involved with these initiatives and the report itself.”

LFE currently works with Kick It Out to provide equality training to apprentice players (16 – 18 years-old) at Football League clubs.