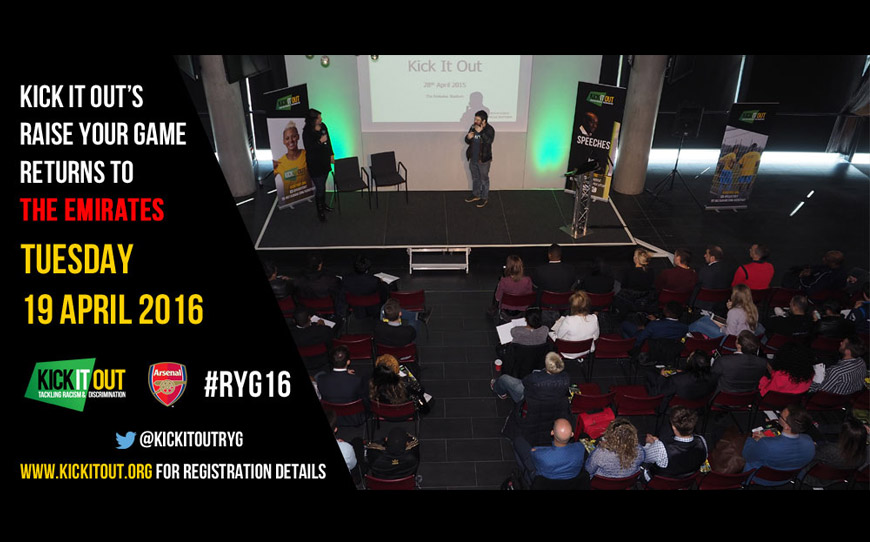 The Emirates Stadium, home of Arsenal FC, will once again host Kick It Out’s national Raise Your Game (RYG) conference on Tuesday 19 April 2016.

The event is now fully subscribed however you can still register an interest in attending here.

Kick It Out is football’s equality and inclusion organisation and the annual RYG event has evolved over the past six years since its inception and is now the pinnacle of the organisation’s RYG series.

The RYG conference, this year hosted by Manish Bhasin of BBC Sport and Premier League Productions, offers attendees a detailed insight from those currently working within the football industry, and an opportunity to discuss the journeys they have taken to get where they are today.

Over 300 attendees were present at The Emirates in 2015 and heard from the likes of Ivan Gazidis, Chief Executive Officer of Arsenal FC, Miles Jacobson OBE, Studio Director at Sports Interactive and Lianne Sanderson, England Women’s International, as well as 96 mentors on the day.

The stature and experience of the mentors can provide specific guidance from various areas of the game, including management and coaching, grassroots and community, administration, football intermediary, media and communications, refereeing, sports science and physiotherapy.

Those lucky enough to attend will be given unrivalled access to connect with experienced professionals from across the sport through one:one mentoring sessions, workshops, panel discussions and keynote speeches.

“I’m hoping that people, in particular women, can be inspired by how I’ve managed to find an opportunity at a Premier League club thanks to Raise Your Game,” explained Rebecca James, a RYG 2015 mentee and now Communications Assistant at Arsenal FC.

Marcus Gayle, former Jamaica International and RYG mentor added: “It would be easy to say the same thing to every mentee that I speak to, but I don’t think that will add any value. What I’ll do is listen to the person in front of me and tailor my advice to the mentee.”

Troy Townsend, Kick It Out’s Education and Development Manager, is aiming to deliver greater opportunities to mentees at Raise Your Game in 2016:

“Kick It Out is delighted to be returning to the Emirates Stadium for the 2016 Raise Your Game conference.”

“This will be the organisation’s sixth national conference with each year seeing the event grow and develop. Raise Your Game has earned plaudits from mentees, along with experienced mentors, who have seen the amazing platform the conference gives those looking to find a pathway in the industry.”

“Since the previous RYG conference, some of the attendees have moved into full-time positions in a variety of roles at the likes of Arsenal, Brentford, Chelsea, The BBC, as well as finding coaching opportunities abroad.”