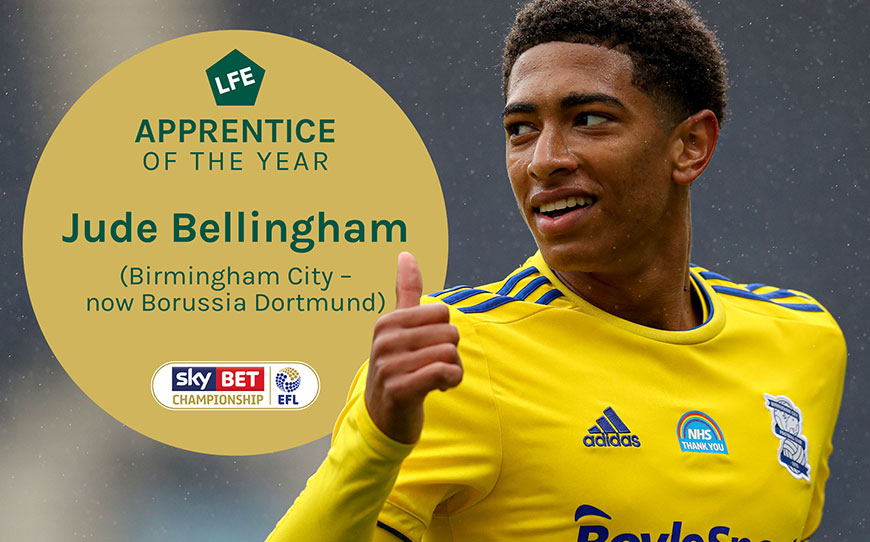 Jude Bellingham has experienced a meteoric rise since starting his apprenticeship just over 12 months ago.

The teenage star was immediately thrust into first-team action, becoming Birmingham City’s youngest ever player in the Carabao Cup at Portsmouth in August 2019.

By the end of the month, Bellingham had gained another club record by scoring the winner against Stoke City in the Sky Bet Championship to claim the youngest goalscorer crown.

In all, the highly-rated midfielder amassed 44 appearances for the Blues, establishing himself as one of the leading teenage talents in the world and encouraging Bundesliga giants Borussia Dortmund to splash €25million to secure his services, making Bellingham the most expensive 17-year-old in football history.

Former Birmingham First-team Head Coach Pep Clotet said: “We have been delighted with Jude’s progress this season and the means in which he has managed his transition into the senior group.

“He’s demonstrated a very high level of intelligence and maturity to ensure he approaches all elements of his programme with absolute focus. To have coped with this unique situation and excel in all areas is a credit to him and the support staff, and we are very proud of the position he is in.”

It is not just on the pitch where he has impressed. Despite his football commitments, the England youth international has remained on track with his academic studies, which includes an additional Sociology A-Level, while he has also made solid progress on the NVQ Diploma and completed his FA Level 2 Coaching qualification.

Mark Sinclair, Head of Education & Player Care, said: “I have known Jude since his Under-12 year and have always found him to be an exceptional young man in all regards.

“His application to all areas of his development and his level of awareness and empathy towards others and situations is something that I have rarely witnessed in somebody so young.

“As a person, he is a natural leader and somebody that inspires others; this is never more visible than in college sessions with other Under-18 scholars, where he demonstrates incredible humility in his approach and a real desire to help support his peers, both on and off the field.

“Academically, Jude is just as driven as he is on the pitch, with him opting to independently undertake an additional A-Level alongside his ASE framework. This is testament to his inherent drive and determination to ‘be the best he can he be’ and to succeed in everything that he does.”

Meanwhile, PFA Educator Steve Guinan added: “Jude has shown maturity and a thirst to develop his coaching skills this season beyond the norm. His desire to not only complete the Level 2 Coaching certificate, but to do it by giving up his own free time in the evenings with younger academy teams, is something I am in admiration of.

“Jude has an excellent rapport with the players and his tactical and technical knowledge is beyond his years. I have developed enormous respect for his dedication to finish the course, as well as the determination to help improve the players within the club’s academy.”

Bellingham, who was named in LFE’s ‘The 11’ in November 2019, has also dedicated time to helping community and charitable causes, whether it be on behalf of the football club or independently.

In particular, he has been heavily involved in ‘The Mustard Seed Project’, becoming an ambassador for the charity organisation which helps students in Kenya access education and further their aspirations.

During an interview with LFE in November, Bellingham said: “It’s important to me to help that kind of community when I can. I’m trying to raise money and awareness through social media, which I think is something that I’m obliged to do being in the position that I am.

“I want to be remembered, not just for football but for my actions off the pitch. The only way I can do that is by carrying on doing what I’ve started to set in motion.

“The project currently is to build as many classrooms as possible and I think as I grow, the charity will grow as well. The more attention I get from doing good things on the pitch, hopefully that will crossover to the charity, so it’s definitely at the back of my mind as a driving factor for me to keep working hard and performing well so that the charity can benefit too.”