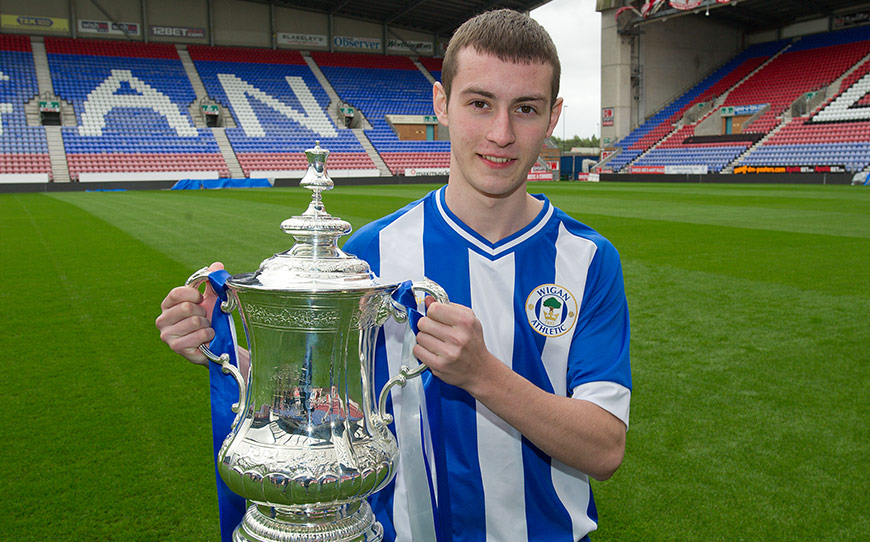 Wigan Academy manager Gregor Rioch has admitted to being “humbled” by the tale of their current apprentice Jordan Unsworth who will leave the club this summer.

A catalogue of injuries and serious illness derailed Jordan’s dream of reaching the Latics first-team.

Jordan is currently weighing up five university offers, plus a potential scholarship to the USA and as he maintained throughout his entire journey, he retains his positive outlook.

His story in full is chronicled below courtesy of Wigan Athletic.

Latics’ scouts spotted him for Hindley Juniors, and he signed on as an Under 14 before gaining a two-year scholarship at the age of 16 – now he really was dreaming.

Always mindful to continue his studies, however, the Deputy Head Boy at St. Edmund Arrowsmith High School achieved a flush of As and A*s in his GCSEs.

He had the best of both worlds at his feet.

But Jordan’s dream quickly turned into a nightmare when, in August 2012, just one month into his time as a full-time footballer, he tore his ankle ligaments during a pre-season friendly. Out for three months.

He returned to full training in November and felt great, back out on the grass and training but alas, tore the ligaments in his other ankle just a few weeks later, in the December. Some Christmas present.

But Jordan is made of tough stuff, he’d worked so hard to reach this point and earn this opportunity, he would just have to roll his sleeves back up and get on with his rehab.

He returned for the second time in February 2013. How great did it feel to be back on the park? No pain from the ankle, and the confidence returning session by session. Then the unbelievable happened.

The ball was there to be won and Jordan followed his striker’s instinct to chase it, colliding with the goalkeeper in the process. It was a freak accident. The ambulance was at the training ground in minutes. The pain was excruciating but still less than the verdict: a double fracture of the right leg. Another six months of rehabilitation. But that was just the start.

Jordan developed bouts of diarrhoea, sickness, fatigue and lost around two stone in weight – he was not the biggest to start with. His bowel became perforated and he underwent emergency surgery to remove part of his large intestine. On top of that, he suffered a collapsed lung and was left with a stoma bag as a temporary bowel replacement.

Never mind playing football, Jordan was lucky to still be alive. He was diagnosed with Crohn’s Disease, a condition which affects the digestive system and to which there is no cure, it simply has to be managed. But manage is exactly what this extraordinary young man has done.

After literally scraping with death, he picked himself up, never lost his spirit and continued on with his life. He resumed very light exercise in August 2013 and continued on with his studies at the start of 2014, he was able to start light work on the grass and, after a second operation in September 2014 to reverse the stoma, he was able to step up his gym routine and regain some fitness.

Meanwhile, he achieved an A in AS Maths and D*D*D* in his BTEC Level 3 Sport Extended Diploma – the highest possible mark, equivalent to A at A level. He also passed his Level 2 Coaching Certificate. Talk about fighting spirit.

So what of the future? Back in training since November, the club having extended his scholarship for obvious reasons, he is now back at a level physically which would have been inconceivable just a few months ago, but clearly he is some way short of the levels required for the professional game and the club have been working with him on a range of options.

“We are all humbled by Jordan’s experience and that throughout his time here, he has kept his dignity intact.

“As a club, we have helped him in whatever way we can and will continue to do so in the future if we can. He is an exceptional boy who I’m sure will go on to achieve great things in his life and we wish him all the luck in the world – because he hasn’t had a great deal during his time with us.”

Jordan is currently weighing up five offers from university, plus a potential scholarship to the USA and as he maintained throughout his entire journey, he retains his positive outlook:

“I leave the club with many happy memories, despite all the problems I had,” he says, “I am so grateful for the care I have received at the club, they supported me through my darkest times and have worked with me in trying to find options for the future. Mike Hurn and Dan Rix deserve a special mention, I will always be grateful for their help.

“Wherever I end up, whatever I do, Wigan Athletic will always be my club, a special place full of special people and it makes me proud to know that I have managed to play some part in the club, in my small way.”

LFE’s Brian Kay who worked with Jordan, until recently as the Latics academy education officer added:

“Jordan is an exceptional young man who always looks for the positives. When I was at Wigan I would use Jordan as a shining example of someone who epitomises the word ‘resilient’.”

As a person he set the benchmark for students to follow. Albeit a relatively quiet young man, he would often lead by example through his actions and professionalism. He was always a pleasure to teach and I have every confidence he will go on to achieve something remarkable in life.”