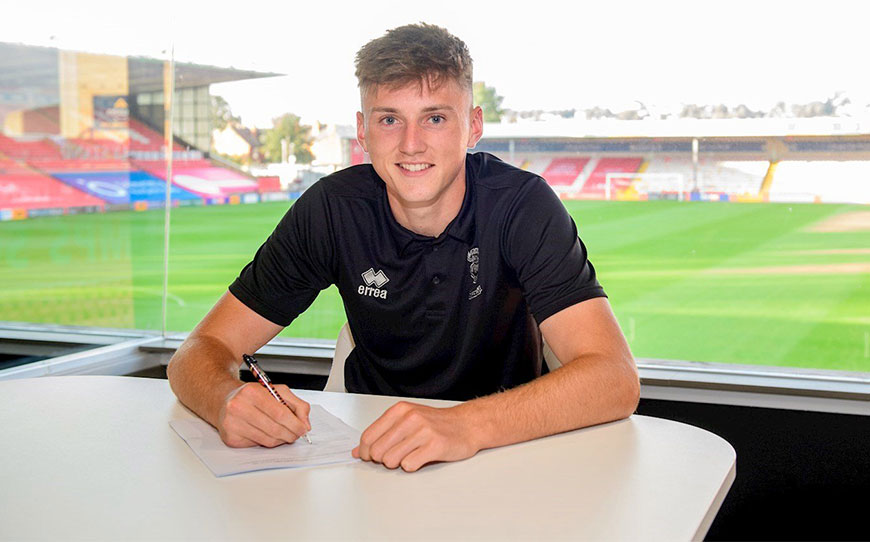 The first-year apprentice, follows in the footsteps of fellow Imps academy player Sam Long, who was also handed a pro deal at the start of the month.

Cann told the club website: “I’ve dreamt of this day ever since training here (for the first time) when I was eight. I’ve always wanted to play here. Coming all the way through (the age groups) and then being able to get a pro deal means so much but I know there’s still loads of work to do.

“The environment created at the club, and what the club wants to do with developing homegrown players, is all good for all the scholars. You have to take all the opportunities that you can get.”

Jez George, Director of Football, said: “Hayden has made incredible progress over the last 18 months and we are delighted that he has signed his first professional contract at his home town club.

“Hayden’s journey, with Lincoln City from eight-years-old, is one that we want to see replicated many times over in the future and one that we hope provides an inspiration for many local youngsters within our academy.

“Hayden excelled in our youth team last season before even starting his scholarship, and since leaving school and joining us on a full-time basis this summer, his progress has accelerated still further.

“This culminated in several first-team appearances in pre-season, including 90 minutes against Nottingham Forest Under-23s, where he impressed Michael (Appleton) and the first-team coaching staff.

“Hayden has an incredible focus, desire and maturity for his age. He has all the attributes required as a centre-back, huge potential and the mentality to match his ability. We have a clear development pathway for him and really look forward to helping Hayden on the next steps of his journey as he aims to achieve all his aspirations with Lincoln City.”