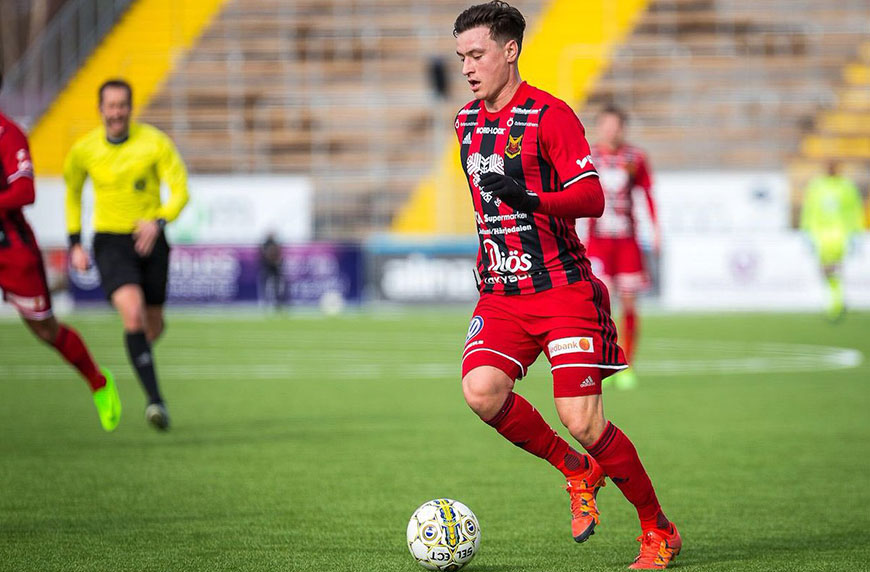 The Ostersunds FK star was playing in front of 50 people in non-league as his dreams of a football career slipped away, but a crowd of nearly 34,000 watched the Swedish outfit triumph 3-1 on aggregate at Turkish giants Galatasaray last week.

The 25-year-old was an apprentice at York City and was handed a professional contract in 2010, but after brief loan spells at Whitby Town and Stokesley, he was released by the club.

Following a year in non-league football with Ossett Town and Tadcaster Albion, Hopcutt feared his chances of a professional career had faded away and turned to LFE for an opportunity abroad.

Ostersunds manager Graham Potter, a former York player himself, expressed an interest in taking the midfielder to the Swedish third tier and it was LFE who facilitated that move with the Erasmus+ programme funding his initial three-months.

After producing a string of impressive displays, Hopcutt’s stay was extended by the club until the end of the season as he contributed to the team’s promotion to the Superettan division.

A further three seasons in the Swedish second tier followed until Hopcutt’s 15 goals in 24 appearances led them to the top flight in 2015.

However, an injury setback forced him to miss the full 2016/17 campaign as Ostersunds lifted their first major trophy, the Svenska Cupen, defeating IFK Norrkoping 4-1 in the final to qualify for the Europa League.

And Hopcutt has returned in style this term, netting five times in nine outings in the Allsvenskan, while converting a spectacular solo run and finish in the first leg against Galatasaray.

The team are now preparing for tonight’s Third qualifying round first leg clash with Luxembourg’s Fola Esch as they attempt to book a place in the competition proper.

Hopcutt, who has reportedly attracted attention from Aston Villa and Brighton & Hove Albion, has thrived under the stewardship of Potter and the club’s chairman Daniel Kindberg, who provides compulsory cultural activities, such as painting lessons, novel writing and theatrical performance, including a recent production of Tchaikovsky’s ballet Swan Lake.

Speaking to the BBC, he said: “The chairman is big on holistic development of players. Running a culture academy alongside football training will help us be braver as footballers.

“It takes you out of your comfort zone but it’s been great for team bonding and I’m sure it helped us prepare for occasions like Istanbul.

“I had to do a routine with a partner, which was very difficult. I’m still a shocking dancer but, just like when you’re playing football, it’s all about trying to perform on the day. I don’t know how it would have gone down at York, but it’s certainly working up here.

“I’ve made a life out here but one day I’d like to come back to England. Obviously Jamie Vardy has shown everyone that it can be done.”

Meanwhile, the squad also contains two other former apprentices, Doug Bergqvist (formerly of Aldershot Town) and Andrew Mills (formerly of Macclesfield), with the latter taking the same route as Hopcutt through the LFE Player Placement programme.

Mills, who is on loan from IFK Ostersund, told LFE: “I think the most surprising thing about the game against Galatasaray was the atmosphere and the crowd there.

“It was on another planet the noise they made. You think you’re prepared for it all but then when you go out and warm up it hits you. It was good to get a taste for it and only makes you want it even more.

“I think the big difference between Sweden and England is, especially in the lower divisions, it’s not as physical and you get a lot more time on the ball and the majority of teams want to get the ball down and play, there’s not much long ball.

“My main target is to keep doing well and moving forward. I started in division four so I want to keep making the climb and hopefully step up another level in the near future.”