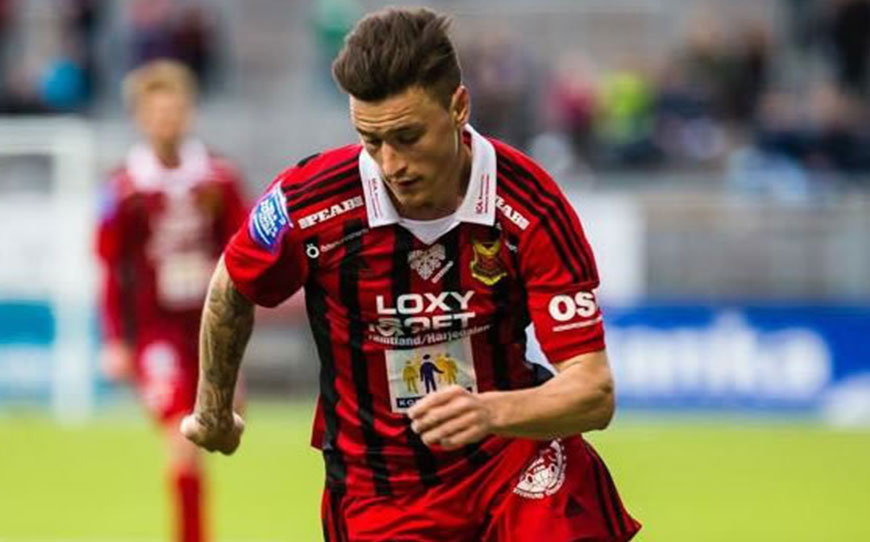 Six years ago Jamie Hopcutt feared that his football career was over before it had even properly got started.

Now 25, he is starring for Ostersunds FK in Sweden’s top division and playing European football. A far cry from warming the bench at Whitby, or patrolling the touchline for Tadcaster Albion in the North East Counties.

Hopcutt was among one of the first cohorts of players that went out to Scandinavia as part of LFE’s player placement programme and initially found himself playing in front of a few hundred fans in the third tier of Swedish football.

This year he has helped his side to a 3-1 aggregate win over Turkish giants Galatasaray, scoring in the first leg. He then laid on an assist as OFK recovered a two-goal deficit against PAOK to march into the group stage of the Europa League, where Zorya Luhansk, Hertha Berlin and Athletic Bilbao lie in waiting.

And far from being daunted by the challenge that awaits, Hopcutt believes that defeating much vaunted opposition earlier in the competition has installed the confidence that they can progress through the group.

Hopcutt told LFE: “I’m excited for the group stage and obviously because we’ve knocked two teams out that are normally in the group stages, we believe that we can get through the group as well.

“There is no pressure on us really because nobody expects us to be there, so we can go out and have fun and enjoy the experience.

“It’s not an easy start but I’m happy to get that one out of the way first, away in Ukraine is not a nice place to go but they were in Man United’s group last year so we know that while out of the three they are the lesser team on paper, it’ll be a tough game. If we can get points away – at home we believe we can win most of our matches.

“We played at Galatasaray which is probably the most hostile stadium you can go to football wise and we handled that. That was a big game. Even in the PAOK game, we were down by two goals in that game so I think maybe that gives us more (belief) because it shows we can come back and fight against big teams.”

Another factor that is in OFK’s favour are the unique conditions. By the time Bilbao arrive at the Jämtkraft Arena in Northern Sweden, the league season will have ended, with plummeting temperatures likely to see the game played at well below freezing.

“When Bilbao come here it will be minus degrees and they won’t like that,” Hopcutt said. “Our season ends in early November and we have two Europa games after that. It will benefit us because we are used to freezing temperatures.”

The club’s meteoric rise has also been built on other foundations. Propelled forward by club chairman Daniel Kindberg, a former lieutenant in the Swedish army, the club is committed to its community and encourages players to participate in cultural activities aside from football. A recent example saw the OFK squad perform Tchaikovsky’s ballet Swan Lake in front of 500 local residents at the city’s theatre.

“The chairman is big on holistic development of players,” said manager Graham Potter. “Running a culture academy alongside football training will help us be braver as footballers.”

Hopcutt, now fully recovered from a broken leg which curtailed a whole season admits that he is “enjoying” every second of his time abroad – though his dance moves still require some work.

“I had to do a routine with a partner, which was very difficult. I’m still a shocking dancer but, just like when you’re playing football, it’s all about trying to perform on the day,” he continued.

So what next for a player who has achieved virtually everything that he wanted to at the outset? A Swedish Championship perhaps? Or with Aston Villa, Wolves and Brighton all reportedly interested, would a return to England appeal?

“The only thing left to do here is to win the league,” he added. “If the chance came after the group stage to come back I’d have to look at that. I think we could have challenged (Malmo) this year if we hadn’t had the Europa League because there was a time when we were a few points off them and we lost to them in the last minute.

“They all have a lot better budgets but every time we play the so called bigger teams we look like winning. There’s only Malmo that we have to look to and they got knocked out of Europe quite early so they could put everything into the league with no distractions.

“I was really lucky to get the opportunity because jot everyone gets to start in division one in Sweden, I know some guys come out on the programme in a lot lower divisions. We got promotion the first year and when we got promoted to the top flight I was voted the best player in the league so it’s been really good.

“One day I would like to play in England and because of the Europa League my name is a lot more out there to English clubs than it was before.”