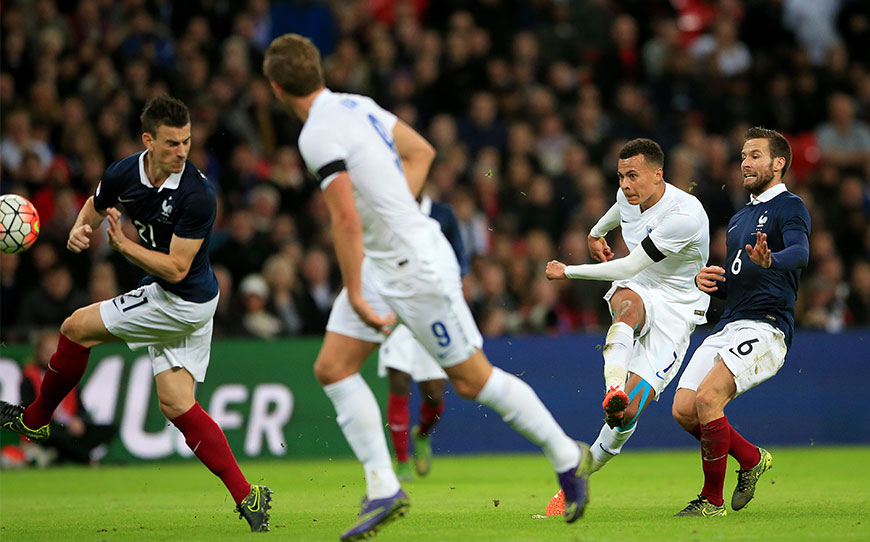 Dele Alli continued his meteoric rise with a “faultless” performance and stunning long range strike for England on Tuesday night.

Just 12 months ago Alli, who is still only 19-years-old, was preparing for MK Dons League One fixture against Port Vale.

Yet today he is at the forefront of England manager Roy Hodgson’s thinking after producing an outstanding display in his first international start during England’s 2-0 victory over France.

The midfielders credentials as a contender for a place in Hodgson’s squad at the European Championships next summer were brilliantly illustrated by a stunning first-half shot that few past club-mate Hugo Lloris, to break the deadlock on an emotional night at Wembley.

Wayne Rooney added a second after the break but understandably, Alli’s contribution was highlighted after the game.

“It was as close to a faultless performance as you can get,” Hodgson said.

“I did not think he was anything other than top class, it is amazing at that age to have no previous experience and to go in and do what he did tonight was quite outstanding. He will obviously get a lot of praise for that performance, and he deserves a lot of praise.”

Alli who made his MK Dons debut as a 16-year-old first-year apprentice, was a mainstay in the Dons team, representing England at a variety of youth levels before he was sold to Tottenham earlier this year.

While his Spurs career only got underway in earnest this summer, Alli’s swift elevation to the international stage after his grounding at MK Dons will provide hope to scores of other young English players who are being developed by Football League clubs.

“I was not surprised as if I did not believe he could play like that, I would not have chosen him,” Hodgson continued.

“Do not forget he is only 19, he has only played a handful of games, this is his first start and it would be nice if he gets to learn the game without too much glare.”

The friendly against France was played only days after the terrorist attacks in Paris and the occasion was marked by the both sets of fans signing the French national anthem prior to kick-off.

And Hodgson said everyone at Wembley deserved credit for their conduct on a sombre evening.

“It was a very poignant occasion and everything I expected it to be,” he said.

“The way the two FA’s set up the remembrance service before the game started was very well done. The players getting together for the minute’s silence, all the things we wanted to achieve, we did.

“Then people had to put that aside and play a game of football between two good teams and once the whistle went the players had to put that all behind them. And it turned out to be a good evening for us as we played well and won the game.

“The players coped with it very well, but players do tend to cope with these things. I think the interesting thing this evening was the game attracted 71,000 people, which is quite incredible.

“It is a great crowd and I thought they played their part in respecting the ceremony and in helping our team perform as they did.”