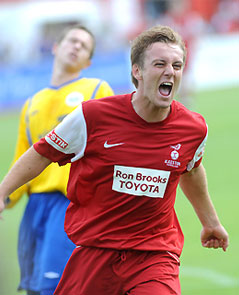 Will McCall signed for Oldham Athletic in the summer of 2008 but after spending two years there he was told the news he dreaded. He would not be getting a professional contract.

After taking advice from LFE regional officer Craig Skinner and after some parental prompting McCall re-took some of his BTEC units in order to give himself a better chance of moving on in to Higher Education.

This went to plan! McCall was one of ten LFE apprentices to attend an open day at Loughborough College last season.

He liked what he saw and quickly made up his mind that the Sports Science and Management Foundation Degree on offer was the next step for him.

He moved to Loughborough last September and has worked well in and out of the classroom, combining his study with regular football.

With the University fielding teams in both the British Universities & College Sport Leagues as well as the Midland Alliance League it has been a demanding schedule for McCall who has now played in excess of 50 games but he is loving every minute of it.

It’s tough obviously to play Wednesday then Saturday throughout the year but it’s been great,” said McCall.

“They both present different types of problem the mid-week games tend to be against people in and around your age. The Saturday games are open age and you’re coming up against lads who are a lot more experienced and sometimes a lot more physical so you have to adapt.”

While Loughborough were eliminated in the semi finals of The British University Cup, McCall doesn’t classify his time there as a success by what solely happens on the pitch, he continued:

“You’ve got to look at the bigger picture, yes I’m playing good grade football and I know that lads have made it back in to the game after leaving here but first and foremost I’m here to learn both educationally and in life.”

“If I come away without any qualifications when I leave here but we’ve won the league or cup then I’d class that as a failure.”

It’s important to me that it’s balanced out so I get the best of both worlds,” he added.