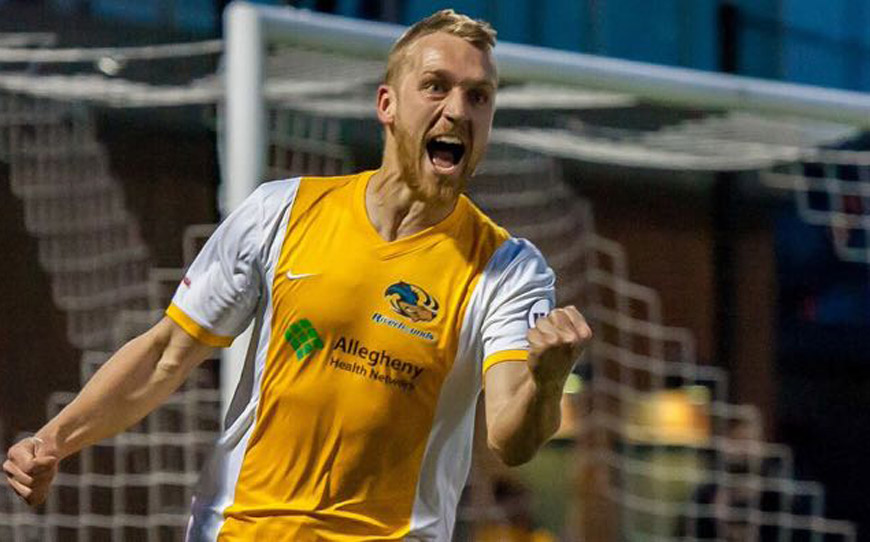 Released by Stockport County as an 18-year-old, Rob Vincent took up the offer of a scholarship at The University of Charleston, West Virginia. He completed his studies in 2012 and continued his football career Pittsburgh Riverhounds ahead of a recent move to Major League Soccer club D.C. United.

Things may not have worked out as planned for Rob Vincent at Edgeley Park but the former Stockport apprentice finally hit the big time this year when he signed for Major League Soccer club D.C. United.

Vincent completed his apprenticeship at Stockport County in the summer of 2009 and took a leap into the unknown by electing to take an offer of a soccer scholarship at The University of Charleston.

His time in West Virginia proved a success by any standards, the Liverpudlian graduated with a degree after three and half years and his ability to pop-up with goals from midfield helped The Charleston Golden Eagles, to four consecutive conference titles while he collected several personal accolades. Like his goals from midfield, his decision to head the US was undoubtedly a game changer and one he remembers vividly.

“It all happened so quickly,” Vincent said. “I’d already been told that I wasn’t getting a professional contract at Stockport and I got the e-mail from the coach at Charleston in May. By August I was flying out to Charleston, West Virginia a little place in the middle of nowhere to start pre-season with my new team.”

Now 25, Vincent, admitted that it was a “dream come true” when he left Charleston to sign a professional deal at The Pittsburgh Riverhounds in the United Soccer League.

“I finished my degree and had 6 months left on my Visa. It was like you’ve got to go and find a team now. So I was e-mailing USL teams and fortunately Pittsburgh were one of the teams that got back to me. Justin Evans was the coach at the time and he said he’d liked what he’d seen so it went from there. I was invited back for pre-season and gave a decent account of myself. They offered me a contract so that was a dream come true for me, signing my first professional contract albeit 4 years late but that was just the chance I needed.”

The midfielder hit 28 goals in 88 appearances for the Riverhounds before joining MLS side D.C. United, in February. “Rob first impressed us during our US Open Cup match against the Riverhounds last summer,” D.C. GM and VP of soccer operations Dave Kasper said. “He is a smart player who has the ability to create and score from wide midfield positions, and his tireless work rate and professionalism excite us.”