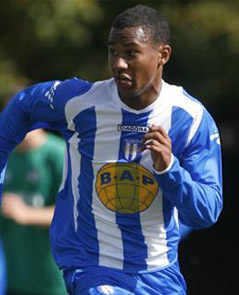 Mitchell Nelson signed as an Apprentice at Colchester United in the summer of 2007 and played in the youth and reserve teams during his two-year programme.

A reserve team player during his first year as an Apprentice, Nelson looked a shoe-in to be awarded a professional contract but his fortunes changed when the Club appointed Paul Lambert to replace the outgoing Geraint Williams as Manager. His reserve team opportunities became limited and he was ultimately shown the door by one manager having promised so much under another.

Having attended LFE’s Assessment Trials in the summer of 2009, Nelson came to the attention of then Tooting boss Billy Smith who converted the full-back into his regular central defender.

Nelson finished the season well at Imperial Fields and came to the attention of both Reading and Crystal Palace who offered him trials. Ironically it was while on these trials that he was spotted by Bournemouth Manager Eddie Howe who stepped in to offer him a three-year deal at Dean Court. And the 20 year old former Colchester United Apprentice admits he was thrilled to be given a second chance in the full-time game.

It feels great. Last year at Tooting I really missed not training and being around football every day. To go to a team that have just gone up to League One is a dream.”

“I think Reading and Palace were both looking at giving me deals but Bournemouth contacted me and said they could offer me something better. Eddie Howe told me I have everything I need to succeed and it will just be a case of sorting out a few points in my game.”