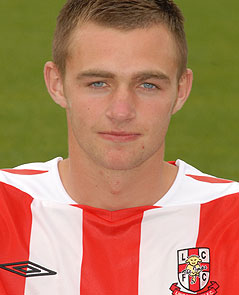 Lee Bennett signed a two year Apprenticeship at Lincoln City Football Club in July 2008 and made his first-team debut just over 12 months later in August 2009 in a 2-0 victory over Bradford.

However, a change of Manager from Peter Jackson to Chris Sutton one month later also led to a change of fortune for Bennett.

Shipped out on loan to Harrogate Town the midfielder was destined never to feature in the Red Imps first XI again and was released by Sutton in the summer of 2010.

Initially disappointed by his departure from Sincil Bank, Bennett was given a second chance as a player, albeit overseas, after seeing LFE’s European Player Placement project advertised on www.lfe.org.uk.

Set up to offer LFE graduates 8-12 week placements at European Clubs, the scheme enables Clubs to bring English players in to their ranks and then decide if they can integrate them in to their Club before offering them a full-time deal.

In the case of Bennett this was an emphatic yes, with his 12 week placement at Friska Viljor in Sweden yielding four goals from 12 matches to help the Club to a fifth place finish in Divison Two (5th Tier).

Bennett returns to Viljor in mid March after penning a one-year deal with the Club and he will be joined by ex Rotherham United Apprentice Craig Gladwin who has also earned himself a similar deal, both will be aiming to impress new manager Tommy Anderson.

“I hope to be the key to our promotion push this year and then hopefully be offered a new contract at the end of the season,” said Bennett. “My advice to players who are looking to go on a placement is to enjoy it and make the most of the available time to experience a new country at the same time as doing something you love in playing football.”

Although Friska Viljor are only in the fifth tier of Swedish football, I know there was Clubs from higher divisions watching our games last season which tells me there is the possibility of moving up through the leagues.”