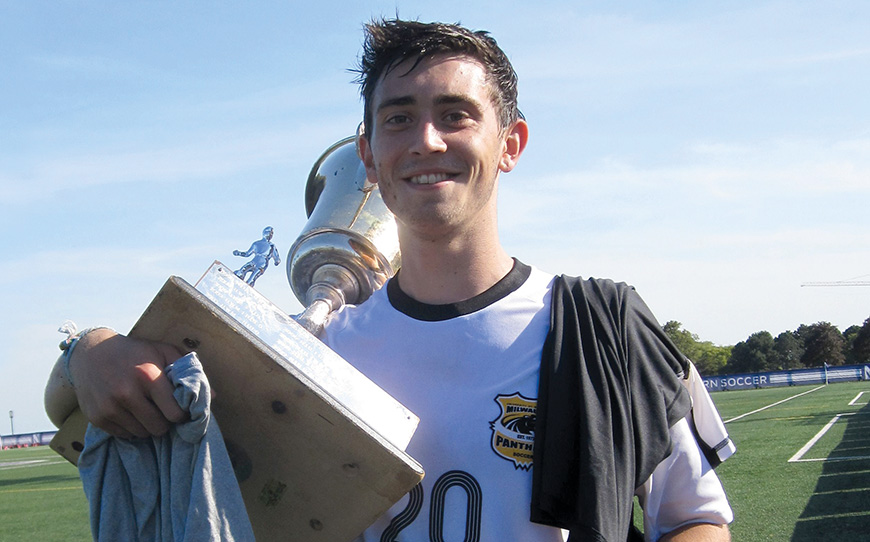 Former Rochdale midfielder Laurie Bell admits he didn’t know what to expect when he made the move to America on a soccer scholarship in the summer of 2011.

After seeing his football dreams dashed at Spotland he decided to take a step into the unknown and is now reaping the benefits studying Journalism and English at the University of Wisconsin-Milwaukee.

“It was a massive step for me” said Bell, “I played in LFE’s end of season trials, took advice from their staff, spoke to numerous head coaches and six weeks later I was in the States.”

“I’d love to say it was always my plan but it wasn’t. It happened very quickly but at the same time America was the subject of many youth-team dressing room conversations.”

When you’re scrubbing the boots of professionals you envy and want to emulate it can be disheartening, so life across the pond playing football at a University with thousands of sun-kissed students sounds appealing.”

While Bell admits he has not looked back since making his life changing decision he has had to adapt from what he had previously been used to.

“I can remember when I first arrived in the States. I was immediately struck by seeing baseball field after baseball field. Forget football pitches. It was all so very different. I was questioning myself and my decision to come?”

Those doubts were vanquished pretty quickly though. The set-up at most universities is a match for professional clubs back home, there’s thousands of fans at each game, a free education via a scholarship and potentially a chance to be drafted for the MLS as you finish your studies.

While the lure of the MLS may appeal to many Bell is keen to stress that that the Academic part of the bargain has to be truly appreciated for any player to make a success of their time as a ‘Student/Athlete’.

“It requires considerable time and effort but earning a degree is very achievable and help is at hand for any students having difficulty,” Bell continued.

By the time I graduate, I’ll have good qualifications, four competitive soccer seasons and a rewarding life experience behind me. It’s my own version of an American Dream,” he added.