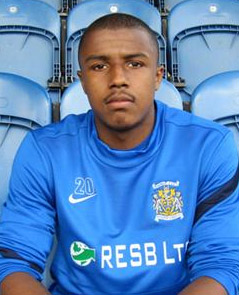 In May after two years as an Apprentice at Rochdale, Jordan Fagbola was given the news he didn’t want.

With the club sliding towards inevitable relegation from League One he was told that his services would not be required for 2012-13.

“Understandably the manager (John Coleman) and Jimmy (Bell) wanted to bring in their own players to try and make an impact on League Two this season,” said Fagbola.

“The manager was very honest with me, he told me he could see areas in which I needed to improve and that he couldn’t guarantee me games in League Two. He wanted players he was familiar with and who had plenty of league experience so I knew that there wasn’t going to be anything down for me at Spotland.”

Out of contract footballers often face an anxious time over the summer months not knowing when or where their next employment opportunity will come from, however Fagbola was handed an immediate shot at redemption by Blue Square Premier outfit Stockport County after impressing during a pre-season trial.

There’s a lot who don’t get that opportunity so I’m just grateful the gaffer (Jim Gannon) and Lordy (Alan Lord) have decided to give me a go.”