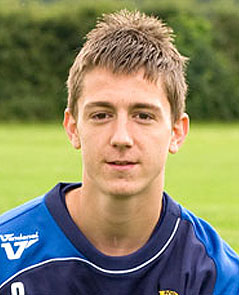 Named as North Staffordshire’s 2010 Apprentice of the Year, Beeston was not rewarded with a professional deal by boss Micky Adams last summer.

Fortunately for him the Club were keen to employ him, just not in the role he wanted. One of very few Apprentices nationwide to have completed the Level 3 Coaching Certificate, Beeston had been earmarked for a different position, that of Technical Skills Coach in the Club’s Development Centre working with 7-11 year olds.

Seemingly set to go into coaching career, Beeston reassessed his plans when Siena Coach Steven Wieczorek came knocking on his door. Wieczorek was keen to recruit the player who had “shown up well” at LFE’S Assessment Trials.

So for Beeston a new academic and sporting mission lay in wait and now some 6 months on the midfielder is an ever present in the ‘Saints’ line up helping them to win eight of their ten fixtures to date.

The midfield dynamo has also appeared on the score-sheet himself on four occasions prompting praise from his new coach and mentor Wieczorek:

We are very pleased with James. His attitude, commitment and desire to achieve and improve are first rate,” said Wieczorek.

“He has had a very positive impact on the programme, scoring four goals and making nine assists in nineteen matches. This earned him a spot in on the All-Rookie team for our league.”

Wieczorek is keen to stress however, that Beeston must also produce the goods in the classroom which is an essential requirement of any student/scholar athlete.

“James has achieved a 3.57 GPA on our 4.0 scale which is very good and something to be proud of,” he added.

We look for James to continue to develop in both areas while at Siena and anticipate that he will be a key component in our success as a programme.”