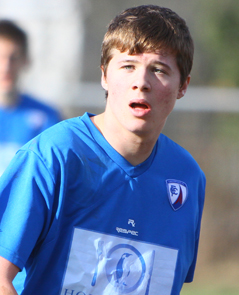 Jack Waddle is hoping to re-launch his professional career by following in his father’s footsteps.

The 19-year-old son of the Tottenham and England legend Chris Waddle, upped sticks and headed to Sweden in July after spending last year as a professional at Chesterfield.

Waddle senior made the move to Olympique de Marseille from Spurs over two decades ago and subsequently admitted that his time in France, ‘taught him a lot about the game that he would never have learnt in England’.

Yet while that move abroad was made in vastly different circumstances Waddle junior is hoping that he can take heed of his Dad’s advice by using his own stint overseas as a launch pad back into professional football.

“He told me it’s a new culture, environment and something different and that I should focus on making sure that I give it my best in the three to four months I’m here – and not to come home with any regrets,” said Waddle.

Based just over an hour away from Stockholm at BK Sports in the city of Eskiltuna, the youngster has noticed a different football philosophy to the one he is used to:

Out here the coaches just try to give you confidence and ask you to do your best,” Waddle continued.

“We’re told to go out and enjoy playing the sort of football we want to play. There’s no pressure to win they just want us to play good football. It’s been great because we get it down and pass and I think that’s the best style of play. I was brought up to play like that so I fitted in immediately.”

Waddle’s acclimatisation to new surroundings has been helped by living with team-mates and fellow Englishmen Ed O’Neill and Darren Jefferies.

“We can’t go up this season but all of us are eager to do as well as we can for the club and see what comes from that,” added Waddle who admits that he would be open to offers when he returns to England in October.

“Football is the national sport back home and it is so high profile that it’s difficult to breakthrough. We all enjoy playing football in the right fashion and that is an enormous help. Some players have their confidence knocked and performances suffer because you feel inhibited, in Scandinavia it’s not as pressurised so it’s an advantage to come over here and learn from a different culture.”

“Also because we’ve been away from home for so long we’re used to that and I think that helps massively because football is such a transient career and you can literally end up all over the place. It’s certainly helped me to mature and be more independent,” added Waddle.