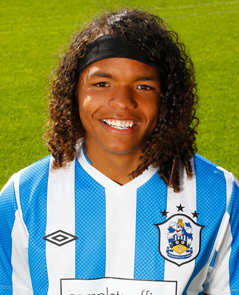 Big things are expected of Huddersfield youngster Duane Holmes who is already making an impact in The Championship just months after finishing his apprenticeship.

A fortnight after collecting the Donald Bell Award, which recognises the efforts of a player who has overcome adversity of some form, during their two-year Apprenticeship and commemorates the memory of Donald Simpson Bell VC, the midfielder was handed his first-team debut by manager Mark Robins at Hull in the Capital One Cup.

Three days later he climbed of the bench to make a real difference on his league debut in Town’s 1-1 draw with Blackpool, by teeing up James Vaughan for the equaliser which led to Robins acknowledging his contribution.

“He gets on the ball, he’ll turn, he’ll twist, he’ll beat people like they’re not there and he’ll commit defenders and slide things through like he did for the goal and the penalty,” said Robins.

He’ll score goals eventually but he’s only 18 so we’re mindful he’s got to be nurtured properly and hopefully we’ve got a player on our hands.”

“He’s got good potential and he’s not on his own we’ve got quite a number of lads showing some signs of promise so hopefully we can nurture them.”

It’s part of the ethos of the club and it’s what the owner demands, we’ve got to try and produce players and the balance is trying to bring them through in to the first-team while winning game,” added Robins.