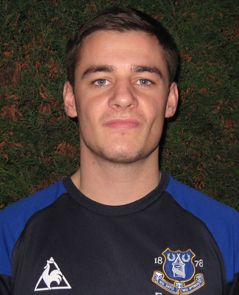 As a defender Charlie Ager was used to keeping his eye on the ball, watching his opponents and keeping his shape now he’s hoping to use technology and his own experience to make a success of a degree in Sport Science by becoming a Performance Analyst.

Released by Alex in 2009 Ager decided that if he could keep tabs on opponents that have included the likes of Marc Albrighton and Nathan Delfouneso (Both Aston Villa) he could take on board sports science principles to offer an alternative perspective to traditional coach feedback.

While the course focuses on areas including physiology, psychology and biomechanics Ager was keen to embrace one particular opportunity that came his way namely the chance to work as a Performance Analysis intern at the Club he supported as a boy, Everton Football Club.

With the role of performance analysis now core to most Club coaching regimes Ager has been able to make an impact at Youth and Reserve levels by offering detailed feedback to players and coaches that can make the difference between winning and losing and more importantly developing players and teams.

While he might have hoped that he would be alongside his contemporaries Ashley Westwood, Matt Tootle and AJ Leitch-Smith in Crewe’s first-team, he is delighted to be still impacting on professional football through the use of technologies such as Prozone and Sportscode to improve young players at Goodison Park.

It was disappointing for me not to get a professional contract at Crewe but I managed to get on to the Sports Science course at John Moores University and it’s been brilliant to come in to Everton as part of that,” said Ager.

“I’ve been working as a Performance Analyst with the Reserve and Youth teams and I’m very grateful to Everton for this opportunity. Hopefully, once I graduate next summer this can be a stepping stone towards a career in Performance Analysis,” he added.