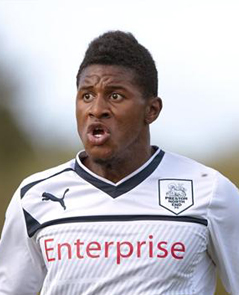 With three first-team appearances as a 16-year-old under his belt Brandon Zibaka might have expected better when Preston North End were deciding which apprentices to keep as professional’s last April.

As it was the youngster who hails from the same part of Manchester as Manchester City Assistant Manager Brian Kidd and Manchester United legend Nobby Stiles, was shown the door by boss Simon Grayson.

But according to his new manager, Garry Flitcroft, someone with plenty of Manchester connections himself Zibaka can rejuvenate his career at Victory Park, Chorley.

The 18-year-old was tipped for stardom a couple of years back when he became North End’s youngest ever player at the age of 16 years and 116 days in 2011, however his career stalled when Phil Brown was replaced by Graham Westley before his eventual exit from Deepdale which came rather more recently.

Trials at Championship outfits Burnley and Sheffield Wednesday were a consolation though a contract failed to materialise but Flitcroft insists that the youngster can bounce back and help his team’s NPL Premier Division promotion challenge in the process.

He said: “Brandon played a couple of first-team games for Preston as a 16-year-old under Phil Brown. Obviously things didn’t work out for him there but he’s been with us for a few weeks.”

“He’s been out for trials at Sheffield Wednesday and Burnley but nothing has come of that. I had a chat with him and told him there’s a route back in for him through non-league,” added Flitcroft who is convinced Zibaka can return to the Football League if he performs well for the Magpies.