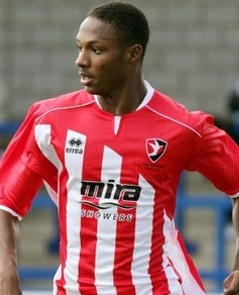 While QPR confirmed their Premier League status at the end of last season after topping the Championship, youngster Bagasan Graham’s future was less than certain.

While many at Loftus Road were elated as the club returned to English Football’s top tier after a 15 year absence Graham was contemplating a battle just to save his fledgling career.

Shown the door by QPR the fleet-footed winger attended LFE’s Assessment Trials where he did enough to impress two Football League Clubs as well as several Universities.

Among those admirers was Cheltenham Town’s Assistant boss Neil Howarth who invited the youngster across for pre-season training.

After a successful trial period at Whaddon Road the 19-year-old signed a one-year deal at the League Two outfit in July.

“It was just pleasing to come here and do well and be offered a chance. Nothing is ever set in stone in football but now I have 12 months to show what I can do,” said Graham.

While the cash injection of Tony Fernandes may have given QPR a lifeline to survival in the Premier League it is a million miles away from the world Graham now occupies.

He has been going steadily about his business in the Cotswolds and has already seen first team action this season, a prospect that would not have been on the horizon if he had remained in London.

Understandably he is now keen to look forward instead of focussing on what could’ve been.

“It’s a very good set-up over here. There should be good things coming from this club in future years.”

“What’s gone in the past at QPR is something that isn’t even worth talking about. I am here now and just looking forward to enjoying my football and playing well.”

I hope that I can use my pace and ability to get wide and put balls in to the box to help the team this season.”

With four appearances to date Graham is on the right road once again even though it’s not the one adorned by Joey Barton, Anton Ferdinand and Shaun Wright-Phillips in Shepherd’s Bush, London.