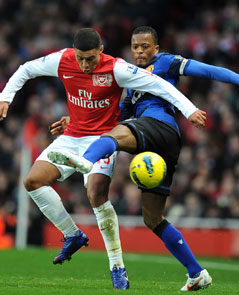 Alex Oxlade-Chamberlain was an Apprentice at Southampton between 2009 & 2011. He was transferred to Arsenal Football Club in the summer of 2011 for a fee reported to be in the region of £15 million pounds.

Former Southampton Apprentice Alex-Oxlade Chamberlain could yet be an inclusion in the England Squad for Euro 2012 after producing some excellent performances for Arsenal in recent weeks.

The 18-year-old wide-man moved to the Emirates in the summer after an impressive season in League One last year which culminated in the Saints winning promotion to the Championship.

While it may have taken him a few months to find his feet at his new home Oxlade-Chamberlain is now showing why the Gunners parted with so much cash to secure his signature last August.

The youngster has started the last five league fixtures for Arsene Wenger’s side and was hugely influential in the defeat against Manchester United before going to town in a 7-1 thrashing of Blackburn Rovers a fortnight later.

His form has prompted some media pundits to suggest that he could be in line for a full international call-up and a chance to put himself in the frame for this summer’s European Championships in Poland & Ukraine.

Team-mate Robin Van-Persie did little to dampen that speculation by describing the player as “fantastic” and a “big prospect capable to bringing something extra to the game” but the player himself is understandably more guarded on his England prospects:

“Obviously it [England call-up] would be very nice, but I have just got to keep my feet on the ground and take it step by step,” said Oxlade-Chamberlain.

I am focusing on Arsenal at the moment, and am in the under-21 squad. All I can do is concentrate on what I am involved in,” he added.