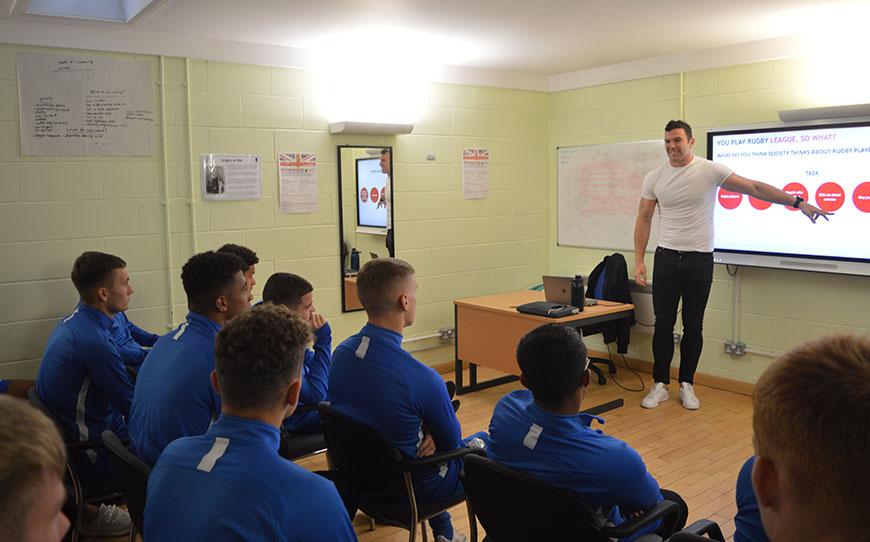 Apprentices at Preston North End explored the topics of identity, stereotypes and societal pressures during a ‘Being Yourself in Sport’ workshop, led by Keegan Hirst.

The professional rugby league player, who in 2015 became the second British professional player to come out as homosexual, is a new addition to the Life Skills programme for the 2019-20 season, sharing how his honesty towards his identity helped him professionally and in his personal life.

Hirst told LFE: “I speak about how we view people and how important it is to be a well-rounded person, in addition to being a good athlete, and how that can actually contribute to you being a better player.

“It’s important for them to not focus solely on one aspect of their lives. By not just focusing on rugby all the time, it’s made me a better person because I’ve built better relationships with the people around me.

“Ultimately, it made me a better player and helped me be successful in the Super League, playing a lot of games in good teams. It really does have a ripple effect into the rest of your life.

It’s important to broaden your horizons and have a diverse range of interests.

“It’s getting the lads to realise that even if they end up being professionals, football won’t be there forever and they need to fill the gap with other things. The earlier they do that, the better equipped they’ll be to deal with life away from football.”

Although Hirst’s career is in rugby, his journey shares many similarities to that of the apprentices, having been in an academy system at Bradford Bulls. And while he struggled for many years to reach the professional ranks, the 31-year-old finally managed to progress to rugby league’s top division with Wakefield Trinity in 2017 having re-evaluated his priorities in life.

“I’ve been in an environment with other young lads where you’re trying to break into the first team and becoming a full-time professional, so I understand the pressures that they’re going through and they seem to respond to that,” he continued.

“I think it’s really important to get across my experiences and what I’ve learned so that people don’t fall into the same traps that I did. It’s also about teaching people that you can be gay in sport.

“The vast majority of the players I’m speaking to aren’t, but someone might be and it’s not just about that individual, it’s about the other team-mates and how they deal with that. There are lots of things that resonate with people, so hopefully they can take something from it to make them better players.

“With the younger generation, being gay is not as taboo as it has been in the past and they are really open with talking about it. I’m honest about my experiences and it’s just part of my story – it’s not the main focus.

“My talk is quite interactive, so they break off into groups and I get some good and varied responses back to certain questions and tasks, so it’s good to get their responses on things instead of just telling them mine.” Second-year apprentice Tyrhys Dolan was impressed by the session and believes it can make a positive impact on apprentices across the country.

“It was great that he was so open and free to talk about his story,” he said. “This sort of workshop shows that kids don’t have anything to worry about. Never be ashamed of who you are and always be honest with yourself.

“In sport, all you want to focus on is becoming a professional and as a kid that gets drilled into you. It’s good to know that there are other things you can do and things that you are good at. It’s about finding who you are and not what you’re told to be.

“When he was talking about his other interests, I instantly thought about coaching and teaching kids. I’d also like to be a speaker like he is and encourage people to not just focus on one thing. Everyone’s got loads of hidden talents that they may not know about yet.”

“These sessions make you think about your mental health and just looking after yourself a bit more by chilling out and not thinking about football all the time. If it becomes too much, you’ll get sick of it and you don’t want that.

“I live away from home and over here it’s all focus on football. Maybe I could get my parents to come over a bit more or go home myself and spend more time with them.”

This feature is included in Issue 39 of LFE’s Touchline magazine.