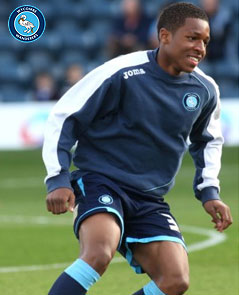 Wycombe Wanderers youngster Kadeem Harris has been announced as the League Two Football Manager Apprentice of the Year.

The winger fought off competition from Oxford’s Aaron Woodley and Aldershot’s Henrik Breimyr to clinch the prize at the Football League Awards last night.

A Wycombe Apprentice has now won the award in 3 of the last 5 years with Ikechi Anya and Matt Phillips both having been triumphant in this category while with the Chairboys.

Last season Pietro Palladino, who is now at University, was a runner-up in the League One category.

After winning the trophy, Harris walked straight to Head of Youth Richard Dobson to thank him for his invaluable support throughout his development. Dobson said:

“I’m extremely proud to have two winners and a runner-up for the Apprentice of the Year award in the last three years. Kadeem’s success again this season is testament to his hard work and endeavours, and I hope he can follow in the footsteps of our previous winner, Matt Phillips.”

“I’d also like to take the opportunity to thank the staff and coaches in the youth department as Kadeem’s recognition reflects the work that goes on behind the scenes with the young players. I hope Kadeem uses this recognition as a catalyst to drive forward in his career with the confidence that he is the best in the country at his level of football.”