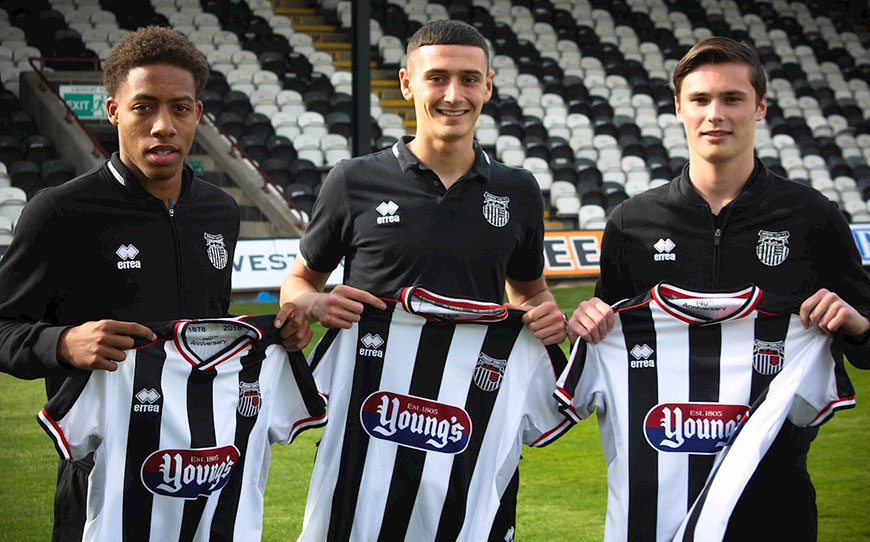 The trio have made significant contributions for the Under-18s this season, who currently sit in second position in the EFL Youth Alliance North East division, while they have also featured in matchday squads for the first-team.

Midfielder Buckley, who is the grandson of manager Alan Buckley and son of former Mariners player Adam Buckley, was the first of the trio to make his senior bow, appearing as a late substitute in the Checkatrade Trophy against Doncaster Rovers back in October and has featured in numerous squads in Sky Bet League Two.

He told the club website: “It’s an absolutely amazing feeling. It’s just a really proud moment for my family, and I’m over the moon with it. I’ve got to try keep it going, and try follow on their footsteps, but also make a name for myself.

“My Grandad talks to me after my games – he gives me feedback on what I did well and did wrong, and how I can improve. He normally gives me a rating out of 10 after a game, so I try get a higher rating after every game.”

Striker Burrell boasts a prolific record in front of goal at youth level and has been an ever-present on the first-team bench since making his debut during a 2-0 defeat to Stevenage at the start of April, with the 18-year-old enjoying further cameos against Colchester United and Notts County.

“I’m very pleased with myself because I’ve been trying really hard to achieve this over the last two years because it’s my dream to be a footballer and do it as a career,” he said. “It’s been amazing to travel with the first-team and be around it all and see how the gaffer manages, and how it all works – it’s just been a good experience.

“My debut was great because everyone was cheering me on – I could just tell everyone was excited for me, and all the coaches were happy for me. Neil Woods and Callum Lester have been very influential for me because they’re always giving me stuff to do, and telling me how I can improve and get better.”

Meanwhile, Curran is yet to experience first-team action, but has been an unused substitute on a few occasions alongside a number of other academy players past and present.

He said: “Michael Jolley has helped me a lot over the last few weeks, and I wouldn’t be here without him. We’ve got three from the Under-18s, and then other lads like Harry Clifton in there as well – it really helps us.”