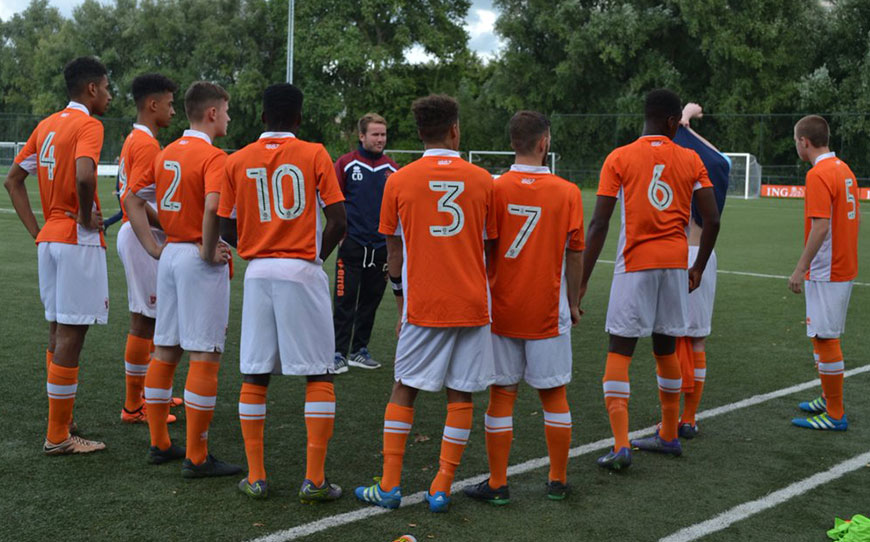 It has been an amazing experience to come to the Netherlands and train with Dutch coaches, play matches against foreign sides and experience the local culture, while bonding with the group.

From the first day when we arrived in Delden, we have been blown away with the facilities available to us and we’ve thoroughly enjoyed every moment. For the first week, we stayed in the Apart Hotel, which was an absolute pleasure. The players particularly enjoyed the games room, where we spent a lot of time, shared a lot of laughter and integrated together as a team. We played pool, table tennis, head tennis and other entertaining activities that have enabled us to relax a bit in between the intense training sessions and matches.

We travelled to Germany for our first game of the trip to play Osnabruck, which was a very interesting contest. They played with a different formation and tactic to what we’re used to, which made our task difficult initially as we got to grips with their style of play. But eventually we were able to adapt our game and managed to pick up a well-earned draw and could’ve even won it had we taken our chances.

We had a few days of training until our next game, starting with a recovery session involving swimming, running and a bit of a kick-about. We were then awarded the chance to have a training session led by a coach from Sparta Rotterdam. The coach was great and he kept the session entertaining as well as being interesting and intense. We were all engaged and focused and just wanted to gain as much from the session as possible as it was such a unique opportunity. It’s not every day you get to train with a foreign coach! He gave us a great insight into the Dutch philosophy on football and conducted a tough session for us to practice their way of playing.

The tour hasn’t just been all about playing football, though, as we’ve had time to learn and have fun. The team have had some language lessons, which were quite entertaining as we all tried to contribute and show we could get to grips with it. We also played foot golf, which turned into a bit of a competitive day as we all wanted to win. It was a good bonding experience for the lads – first years and second years – to all come together away from the pitch and spend time getting to know each other.

This set us up for the game against FC Utrecht, which proved to be a great game for myself. It was an awesome feeling to just be there and it was a great atmosphere to be a part of. We were far superior in the game and played really well as a group. However, we weren’t able to get a breakthrough and it seemed as if a draw was going to be the final result. But I managed to create some space and just went for a shot from distance that looped into the top corner. It was one of the best goals I’ve scored and to do it over here is an amazing feeling. We certainly made the most of it by celebrating quite a bit – even our keeper joined in the pile on! It’s certainly a moment I’ll never forget.

The team were able to visit Sparta Rotterdam’s stadium to watch them play Ajax. This was another great experience to see, feel and hear the atmosphere in the Netherlands. We have also been fortunate enough to go to Ajax’s stadium, which was amazing and pretty overwhelming really. Its size is huge and looking through the museum, you really get a feel for the history of the club.

Our final game of the tour came against a good Excelsior team, which was a great test for us. We had a couple of players missing, so the task was made more difficult for us, but we worked hard and tried our best to get a good result. Unfortunately, we did lose 2-0 – to a free-kick and a penalty – but we can definitely learn from the way they played and analyse how we could play against that style better next time.

Overall, it has been a great learning experience, both on and off the pitch. Football-wise, the training sessions and matches against foreign opposition have exposed us to new methods and ideas that we can take back home and improve our game. And away from the pitch, we have had the chance to integrate together as a team in a social environment and visit places and landmarks that we wouldn’t have otherwise seen, so it’s been a fantastic couple of weeks.