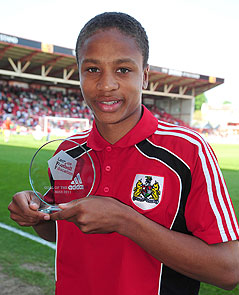 The winner of the March 2011 Goal of the Month competition is Bobby Reid of Bristol City.

Reid saw off the challenge of 5 fellow Apprentice players to amass 44% of the public vote.

The standard of goals submitted (not only in the final shortlist of six goals) is a fantastic advertisement of the quality of the Youth Alliance and Academy Leagues.