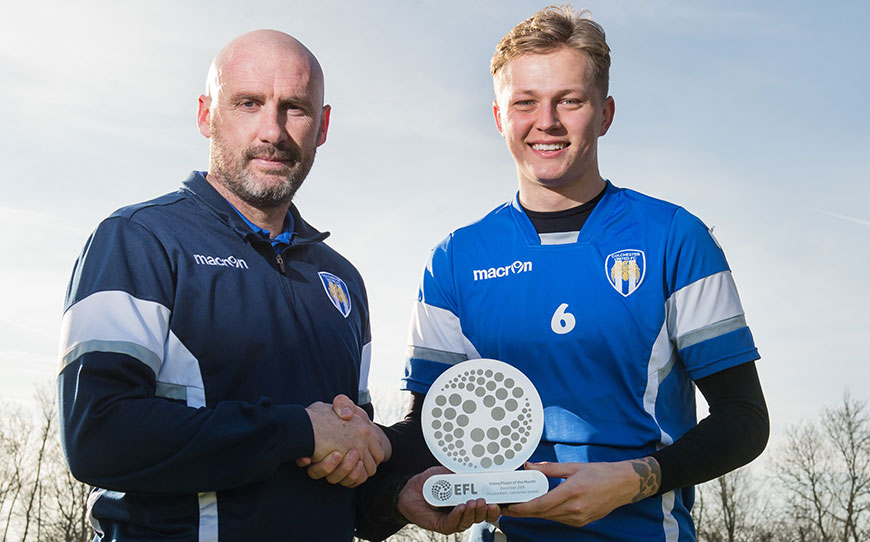 Colchester United’s Frankie Kent has been named the EFL Young Player of the Month for December following a string of impressive performances at the heart of the U’s defence. The 21-year-old academy graduate featured prominently in the U’s defence helping John McGreal’s side remain unbeaten over the busy festive period.

And McGreal himself, a former central defender of some note has offered high praise of the youngster he helped to nurture through the club’s apprenticeship programme.

“If you look at the number of clean sheets we’ve had, he’s brought an element of composure. He’s a footballer and wants to bring it out from the back,” McGreal said.

“It’s not only his defending aspects, it’s starting us from the back as well.”

“It’s entirely up to Frankie how far he goes,” McGreal continued.

“He’s a ball-playing centre-back, he’s 6ft 2in, he’s getting more aggressive with his play and his reading of the game is excellent. He’s still got a load to do, but a centre-back playing League Two football at 21, that bodes well for him.”

Kent who has made over 50 appearances for the U’s is making the most of first team football and McGreal’s decision to deploy him as one of three central defender:

“It’s actually come as a bit of a shock to me, but I’m really pleased to have won it and I just hope we can keep our good form going,” he said.

“I’m really enjoying the position I’m playing at the moment with our new formation and if you enjoy your football naturally you’re going to play better.

“You gain so much experience and have to learn so quickly. There’s points at stake and every game matters so you need to be 100 per cent on it all the time and I’m very fortunate to have been given an opportunity here that I might not have got elsewhere.”

He also thanked his manager for being a key part of his development: “He’s made me the player I am today having worked with him from Under 16 level,” Kent said.

“He tells me the things I don’t want to hear and makes me do things I don’t necessarily want to do but he’s given me the freedom to let me play how I want to play and it’s helped.”

Director of Youth Development at the EFL David Wetherall said:

“Frankie has played a very positive role in Colchester’s recent good form. It’s very pleasing to see a product of an Academy not only graduate to first team level but performing strongly at that level and Frankie is certainly doing that at this time.

“It’s also pleasing to see that the Clubs continued focus on developing their own young players is having a very positive effect at first team level.”