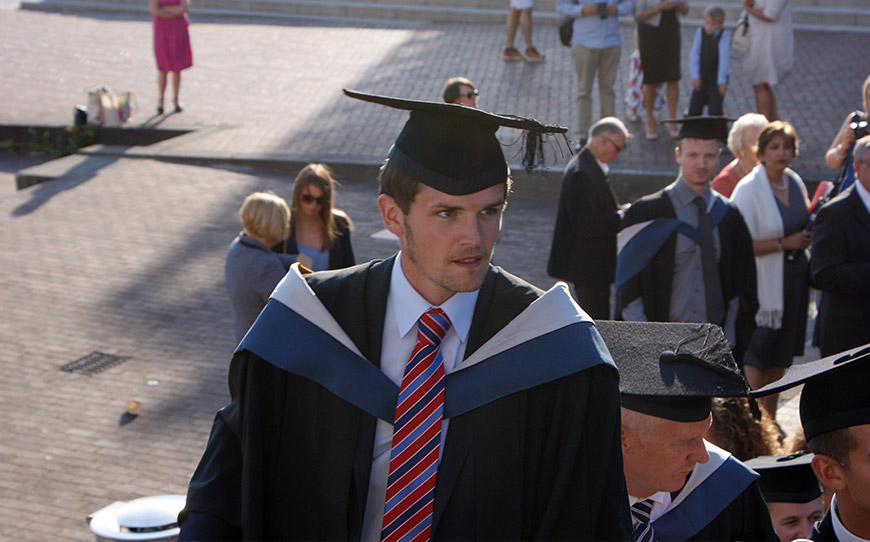 Kieran D’Arcy has told LFE how he made the transition from player to full-time NHS Physiotherapist with a little help from The Professional Footballers’ Association and Salford University.

Released by Premier League bound Blackpool in 2010, D’Arcy elected to continue his studies. He took a place on The PFA’s Physiotherapy course at Salford University and graduated in 2014 with the honour of attaining the highest mark across all full and part-time students on the programme.

Kieran D’Arcy turned down the chance to stay in professional football and instead used his academic background to take advantage of The PFA’s longstanding relationship with Salford University by enrolling on their BSc (hons) degree course in Physiotherapy.

D’Arcy admitted that the precarious nature of football and the support on offer to those leaving the game through the likes of LFE, The PFA and his club helped sway his decision.

“I started on the course after I’d left Blackpool football club and it was really The PFA that helped me make my decision to come to Salford University because of the significant funding that they provide and support they offer,” he said.

“The (then) education officer at Blackpool (Steve Potter) had good contacts, we had a few discussions and it got to the point where it was a case of going into a professional contract or another profession and the PFA funding helped.”

While D’Arcy’s application on the educational elements of his apprenticeship helped support his switch he admits that the degree course proved a challenge.

“I used to think my two-year apprenticeship was demanding but when you come on to the (physiotherapy) course it opens your eyes up further,” D’Arcy explained.

“Four years felt like forty at times. It’s study day in day out, writing essays and going on placements. You see and help patients of all different ages and backgrounds though and it is rewarding.”

D’Arcy dispelled the myth that footballers achievements cannot translate to academia by gradating with first-class honours degree and attaining the highest mark of all the full and part-time physiotherapy students at the University. That effort was recognised through the receipt of a special merit award and while he is continually asked if he’ll follow dozens of other graduates of the course back in to football he remains delighted by his employment at the Blackpool Victoria Hospital

“This involves me working daily on a Cardiac intensive care unit to treat post-surgical patients who have had either cardiac (heart) or thoracic (lung) surgery. I work closely as part of a multidisciplinary team with cardiothoracic surgeons, anaesthetists, critical care nurses, occupational therapists, pharmacists and at times, speech and language therapists, to each provide our input to collaboratively treat individual patients.

“I’m often asked if I want to work back in football but I’ve enjoyed working with people from all different ages and it’s opened my mind and options up.”

“It’s hugely rewarding, when you’re at a football club you automatically think musculoskeletal injuries because that’s all you’ve ever seen but there’s a vast variety of areas involved in physio.

““It’s not all about bones and muscles it’s more than that – coming and working in a hospital environment opens your eyes up to that because a lot of the patients are of a different age group and it’s technically life or death for them and the rewarding thing is that you can help save people’s lives.”