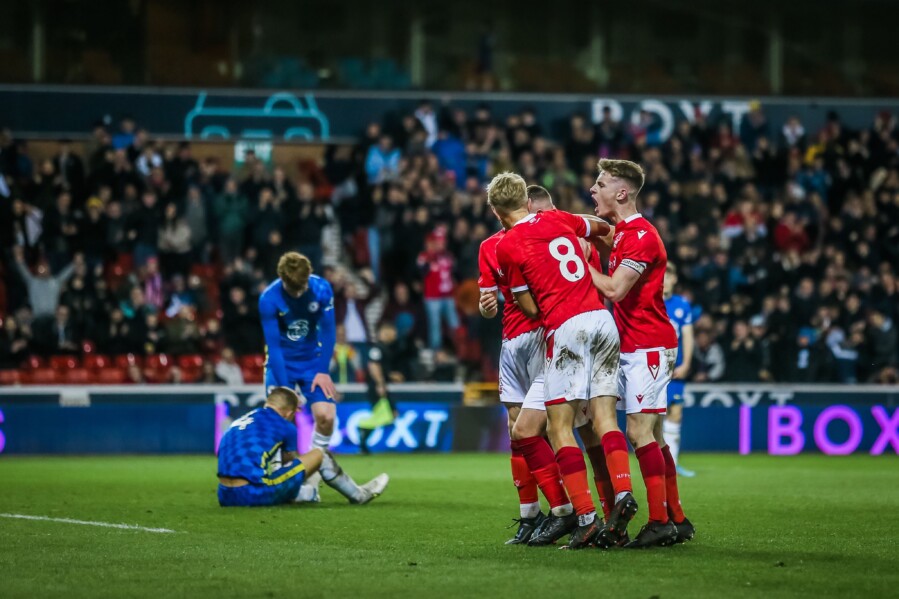 Nottingham Forest Under-18s have reached the FA Youth Cup final for the first time in the club’s history after scoring three goals in the space of seven minutes to beat Chelsea at The City Ground on Monday evening.

Chelsea, who have lifted the FA Youth Cup nine times since its inception in 1952, got themselves in front through Charlie Webster just after the hour mark and were in control as the game entered the final stages.

However, with four minutes to go, the game took a dramatic turn as Dale Taylor fired the resilient Reds level.

Detlef Esapa-Osong, who has scored a number of Forest’s goals in this year’s competition, then put his side ahead with a deflected finish after a scramble in the box. There was still time for the in-form striker to grab another, too, as he fired a penalty into the roof of the net in the 90th minute to seal Forest’s progression into the final.

Speaking after the game, Joyce hailed the positive impact the supporters had on the night.

“It was a great atmosphere. It was fantastic that the fans have come along and the boys really appreciate that. It gives them a taste of what its like to play for the first team here, so its been a really enjoyable night for them all.”

On the dramatic comeback, Joyce added: “I thought we were really unfortunate to go a goal down with a deflected shot and you can easily get deflated, particularly when you are playing a side like Chelsea. You can look at it and give up; we didn’t, there were blocks to save goals, sprinting back towards there own goal when it would have been easier to give up and accept defeat.

“We’ve worked hard from the start of the season and they’ve progressed since then. They are definitely the youngest team in the tournament and we’ve got eight or nine Nottingham boys in the starting line-up, and more on the bench that are desperate for the club to do well, so it is a massive night for them.

Joyce’s side will now face Manchester United in the final at Old Trafford. United hold the record for being the competition’s most successful club, having won it ten times – one of which came under Joyce’s stewardship in 2011.