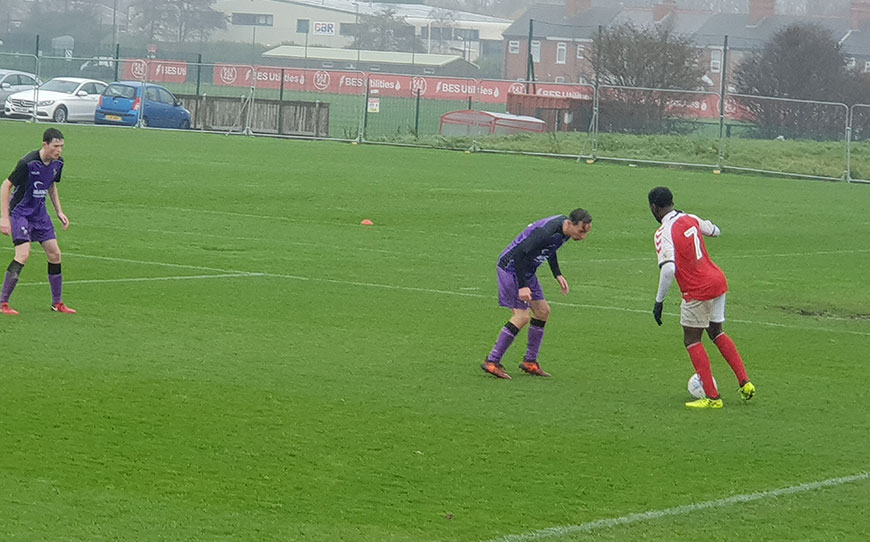 By Matthew Winder: Fleetwood Town Under-18s lifted themselves up to sixth position in the EFL Youth Alliance North West division after a comprehensive 7-1 victory over Port Vale Under-18s.

Kian Makepeace starred for the hosts with a hat-trick, while Katlego Mashigo bagged twice and Carl Johnston and Shayden Morris also got on the scoresheet, with Joe Berks providing a consolation strike before being dismissed late on.

Vale entered the game having lost five of their previous six games and got off to a disastrous start as they slumped to a two-goal deficit inside the first five minutes.

Second-year apprentice Mashigo broke the deadlock with a simple finish into an empty net having reacted quickest to a rebound following an initial effort from James Hill.

Fleetwood’s lead was doubled just moments later when an excellent pass over the top of the defence played through Johnston, who made no mistake with an accurate strike.

Jay Matete was at the heart of the majority of Town’s attacking moves and his through ball created the third goal, allowing Makepeace to calmly slot into the corner of the net, sending the keeper the wrong way in the process.

The margin was extended to four shortly after in impressive fashion when Morris skipped past his marker before unleashing a pinpoint shot into the top corner from 20 yards out.

And the home outfit were not finished there as they added a fifth, with Mashigo doubling up after Vale were unable to clear a corner, leading to the youngster smashing home from close range.

A torrid first half for the visitors did end with a brief moment of positivity as they pulled one back on the stroke of half-time through Joe Berks, who ran through multiple defenders before following in on his initial effort that was parried out by keeper Alex Clayton.

Vale were much improved after the break and threatened to close the deficit again, but they failed to capitalise on a couple of openings, while at the other end Mashigo and Matete combined effectively, although the latter struck over the bar.

Ryan Rydel continued to deliver dangerous balls into the area and he was the creator for Fleetwood’s sixth after keeper Joe Collinge spilt the cross into the path of Makepeace, who controlled superbly before firing home.

A seventh was added to the tally from the penalty spot with 10 minutes remaining, with Makepeace converting to complete his hat-trick after Cian Hayes had been brought down following an excellent run down the left.

And there still time for a final nail in the coffin for the away side when Berks was sent off for violent conduct after a poor challenge on Matete in the 88th minute.

“The lads have been taking the messages on board and put in some great patterns and some fantastic finishes,” Fleetwood Under-18s manager Simon Wiles told LFE. “I don’t think we allowed them a shot on goal apart from the goal in the first half, which showed the way we were playing and the way we were defending.

“We just go about our business throughout the week to try and get the best performance, whether that’s a win, draw or a loss.”

Port Vale PDP Lead Coach Mick Ede said: “We didn’t deal with their movement in the first half and ultimately that’s what cost us the game. We were second best.”