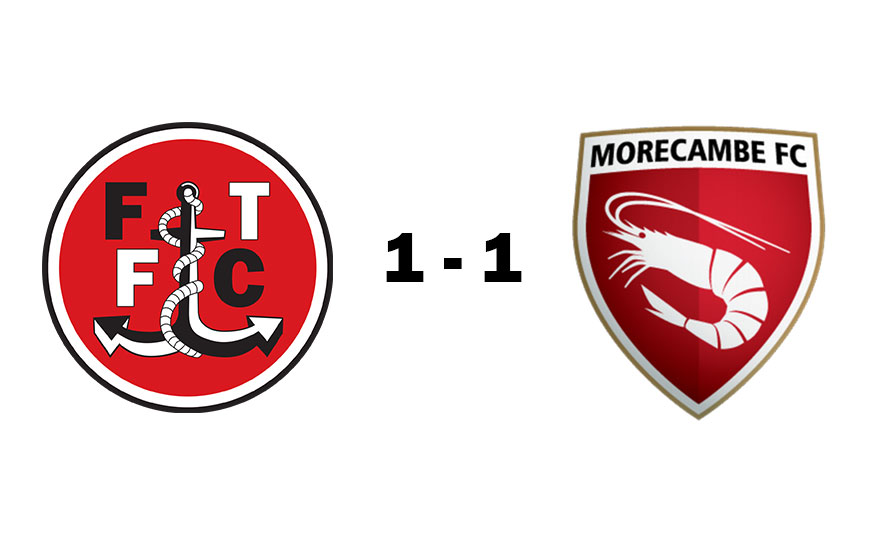 By Dan Barnes: The points were shared at Poolfoot Farm as Fleetwood Town Under-18s and Morecambe Under-18s played out a 1-1 draw in the EFL Youth Alliance North West division.

Dylan Meredith, on a work experience loan from Burnley, opened the scoring in the first-half for the visitors, but Fleetwood skipper James Hill levelled the scores to make it six games without a win in all competitions for Morecambe.

Despite their recent poor form, the Shrimps started brightly and almost got off to a dream start when keeper Scott Pengelly was forced into action to keep out Meredith’s effort from close range after just six minutes.

Kai Herbert then went close, sending an acrobatic volley narrowly wide of the post after getting on the end of Meredith’s dangerous corner.

The home side’s first chance of note came after 10 minutes before the break when Hill’s header from inside the area was well saved by Olivier Jumeau.

The away side then went ahead just moments later when Meredith found a way past Pengelly with a fine free kick after Herbert had been fouled by Ryan Rydel.

Simon Wiles’ team improved after the restart and drew level three minutes into the second half when first-year defender Hill flicked the ball over his marker and fired home from Rydel’s free kick.

Substitute Shayden Morris then wasted an opportunity to put Fleetwood ahead when he dragged his shot wide after an incisive pass from Liam Goldsborough played him through on goal, while Hill threatened to double his tally with an overhead kick moments later, although his effort sailed over the bar.

After enduring a difficult 20-minute spell, Stewart Drummond’s Morecambe youngsters came agonisingly close to restoring their lead when Amilcar Codjovi Djau brilliantly chipped Pengelly, only to be denied by the bar.

With three minutes remaining, there appeared to be a late winner when Town had the ball in the net, but Under-16s player Cian Hayes was ruled offside in the build-up.

The away side fashioned a couple of half chances in the latter stages, with Herbert forcing Pengelly into a routine save from distance before Ibrahim Bakare headed wide from Freddie Price’s cross, but neither team were able to produce the decisive goal.