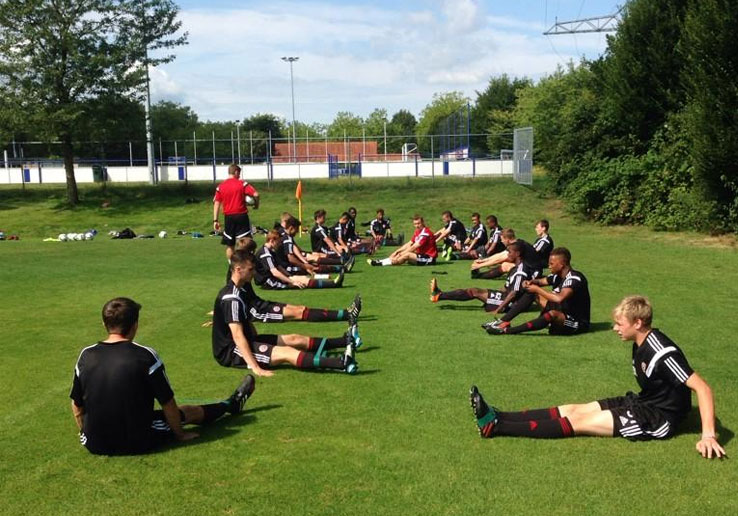 Everyone seemed up for the Feyenoord game at breakfast, talking between each other about what we need to do which was a good sign. Breakfast was at 10am and afterwards we went into one of the meeting rooms. The lads who were asked to compile information on Feyenoord delivered what they found. It helped because it showed where we could expose them which personally helped me as the front man.

Trav, with the help of Alex Delves, put together clips of us vs NAC to show what we did well, it was a good confidence booster for the game ahead. It was a strange experience biking to the venue to play a game because we were playing at the local facilities. Getting all the equipment bags with all the kit and medical there was challenge we had to overcome! The Feyenoord game was a challenging one and although we had 16 chances to their four, we lost the game 2-1. I was happy with my performance, my overall play, especially hold up play. Trav said we need to be more clinical and the final ball needed to be better. We got a lot out of game as a team which can only act as a positive.

Later in the evening after tea, Paul Barlett took the whole the team on the bikes to the local ice cream store and treated us all to an ice cream, a nice treat! When we got back to the hotel, we had a football quiz organised by Sonna from TrainingTrips. That was good banter and at least my team of Ioan, Joe and Rhys didn’t come last! We got the rest of the night off, the day looks promising tomorrow! A trip to Amsterdam Arena for a tour and to watch the Ajax game plus a tour round Amsterdam. It also includes a change of hotel with the other teams so a very busy day.

It was an early start but the day ahead looked like a good one, with the tour around Amsterdam, a tour of the Amsterdam Arena plus watching the Ajax vs PEC match and finally changing to the new hotel! We left our old hotel at 9:00, everyone seemed like they didn’t want to leave, probably because the hotel had been brilliant all week.

We got close to the Arena and it was a fantastic structure and sight. It was very modern and was very ascetic stadium. The other three teams from the LFE tour arrived a little later than us and shortly after the tour began. The inside of the stadium is also very modern and impressive, the tour guide said they spend a lot of money on the improvements of the stadium as it also hosts the Dutch national team, concerts, festivals etc. The stands and the pitch was immaculate, colourful stands with a perfect pitch for playing.

When the tour had finished, we made our way back to the coaches and the city of Amsterdam. In groups of 4 and 5 we got two hours to explore the city. It was interesting to see a different city. The people were very friendly especially the Ajax fans having a drink before the game later on that night!

When the two hours was up and the lads had bought their souvenirs and were ready to head back to the Amsterdam Arena. Before we watched the Ajax game, the four teams had a Q&A session with the Dutch legend and ex world class goalkeeper Edwin Van der Sar and his son Joe, who had been at Manchester United and Ajax youth systems. It was an amazing experience especially being a Man Utd fan, he preached and passed on a key message of hard work dedication, sacrifice which were wise words but are always reiterated by our club and coaches. The Ajax game was immense, the fans seemed to come out of no where and the support was unreal, although a 1-0 defeat to PEC, whose fans were also excellent. The dutch game is a passing one, playing off the back is an emphasis worked on. Their players are mostly homegrown and technically gifted. I learned a lot from Ajax’s striker because his movement and work rate was very good. After the game was over, we got on the coach to the new hotel, which seemed nice, our room was good, upstairs and downstairs. See more of the hotel tomorrow, it was time to get to bed after an unforgettable day!

Again another early start, we had a training session early doors. The breakfast was decent, similar variety to the last hotel. We got time before breakfast and training, this time was spent using the hotels facilities. It had a lot to do which all the lads are enjoying, including table tennis, pool, 1vs1 pitch, driving range etc.

Although some of the rooms aren’t as modern as the last hotel, the staff and things to do made up for it. Training was good in the morning, working on our shape leading up to the game vs Osnabrück, a good German outfit to get what we wanted out of the game. Straight after training lunch was served, it was very good and fueled us up for a second session.

Before our second session we looked at clips from Feyenoord – what needs to be better, it was helpful for me but more helpful for our defensive line as we were looking at playing out from the back and positioning. Second session was good fun, lots of finishing work for the forward players. I enjoyed this massively because it was the only finishing specific training I’ve done all pre-season with coaches. In the evening we had tea and had a ten pin bowling session which was good for a change! We beat the coaches team which was an added bonus! All in all another good day and good build up to the game on Wednesday!