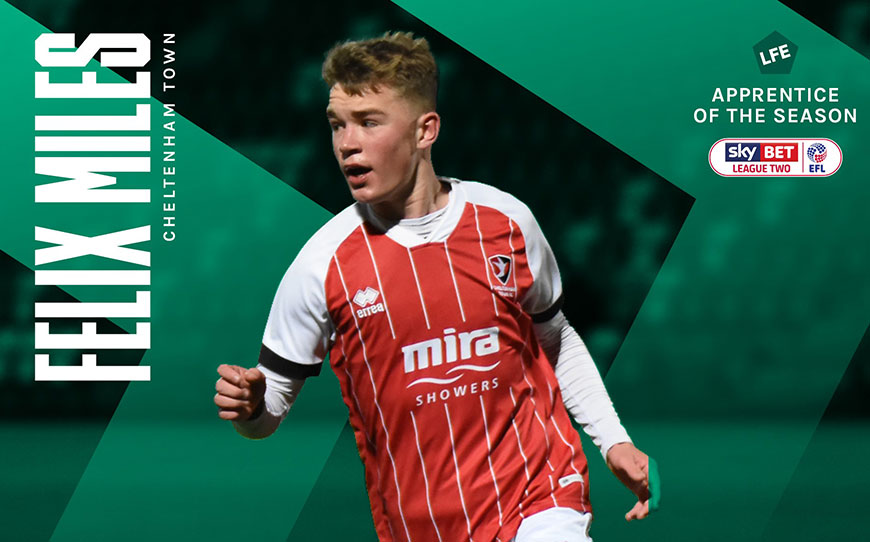 Felix Miles has excelled in all areas of his apprenticeship, having already made his professional debut, while also progressing well on the BTEC Extended Diploma and Sporting Excellence Professional (SEP).

The Cheltenham Town teenager has scored 14 goals for the youth team this season, establishing himself as an influential figure in the side despite only being a first-year apprentice.

Seventeen-year-old Miles was rewarded with a first-team opportunity in December, when he appeared for the final quarter of an hour of a Papa John’s Trophy defeat to Portsmouth.

“Felix’s creativity and ability on the ball caught my eye in pre-season and I felt he could cope with the demands of training with the first team,” Michael Duff, First Team Manager, said. “Felix has trained with us all season and he is constantly improving, moving the ball very well and scoring goals and assists in training.

“The professionals love training with him because he is very creative, always taking risks and this is rare in a young player. He works very hard, is polite and always doing extra to try and improve. I have enjoyed having him in the first-team environment and he is there on merit due to his playing ability.”

The talented midfielder has showcased tremendous resilience and strength of character to reach this stage in his career, having missed a lot of football over the years due to suffering from an extra bone growth in his foot, as well as being diagnosed with Chronic Fatigue Syndrome.

Pete Haynes, Lead PDP Coach, said: “I have known Felix for the past nine years after he joined Cheltenham Town as an Under-9. Throughout his time with the club, Felix has been an exceptional young man who has dealt with ups and downs both inside and outside of football with great maturity, resilience and always with a smile on his face.

“Felix’s attitude, application, work rate and sheer desire to succeed is phenomenal – his mentality is stronger than any other young player I have worked with, especially when dealing with the highs and lows that come with being a young man finding his way in a very competitive environment.

“From his strength and conditioning sessions, to his individual work, to performing at high level men’s football on work experience, Felix’s ability to put his mind to something and not only cope, but strive and succeed, is testament to him as a person.”

Miles’ commitment to education has seen him achieve in the classroom, too, gaining distinction grades in all of his assignments so far. In addition, he has delivered a number of training sessions to the Under-9s to support them in their football development and also read to local primary school children over Zoom on World Book Day.

Academy Manager Antoine Thompson added: “Felix Miles has been at the academy since the age of eight-years-old. His technical play has been a pleasure to watch, with his tricks and outrageous goals over the years.

“He’s trained with the first team all season and made his debut for the first team as an Under-17. Most importantly, he’s developed into a grounded young man who shows respect, manners and exemplary behaviour in our environment and the wider community.

“As a young man in the workplace, Felix sets an extremely good example and leads his age group through his punctuality, work rate and the way he embodies the club’s values of honesty, integrity and respect.”