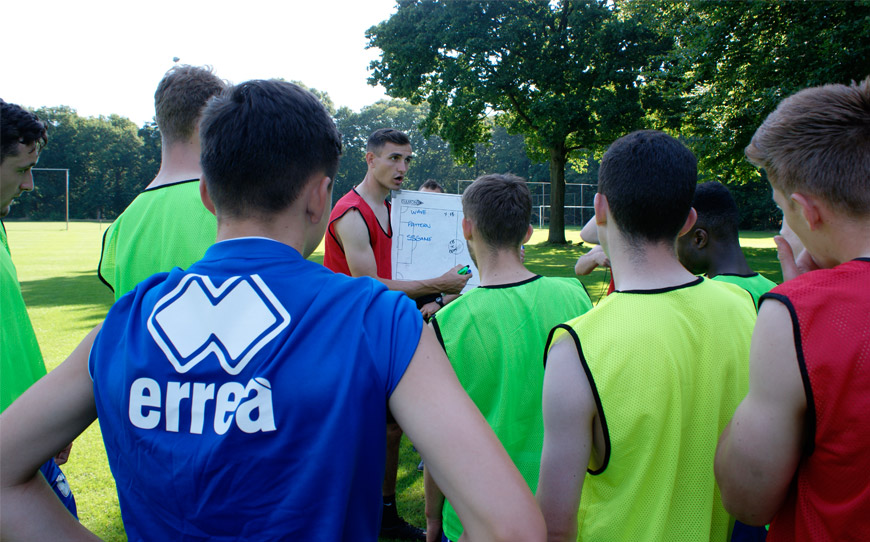 Tuesday started gloomy, with grey clouds and rain everywhere – no different to the weather back at home!

We boarded the coach and made our way to FC Twente for our game – the hour and a half trip had some of the fellas thinking about the game whilst others enjoyed their sleep.

The fellas got all of the equipment off the coach as we made our way into the impressive training complex to get ready. The stadium was pretty enormous and much bigger than we had expected! Additionally, the pitches were stupendous, but unfortunately we didn’t get to enjoy the grass pitch as we ended up playing on the 3G pitch. Although this was the case, the surface was nearly close to the real deal and made the experience much better.

Despite the conditions and atrocious weather, the fellas started the game with high spirits and motivation to win – the weather was not bringing us down! The energy was great throughout the game, but the first half ended on a rocky patch as our left back, Callum Scorah, experienced rather unprofessional behaviour from FC Twente’s right winger as he punched Scorah in the back of the head. Very strange behaviour!

To our disappointment, the first-half ended 1-0 to FC Twente, and despite our best efforts, that scoreline remained at the final whistle, too.

Although we lost, we appreciated the experience as we came back with more knowledge of how the Dutch opposition play and how we could improve in areas that let us down on the day.

Due to the hard graft of the previous day, the fellas were in need of a much deserved rest. A walk around the hotel grounds was the first course of action and then afterwards a team bike ride into Den Bosch took place.

Standing Paddle Boarding was the next task we faced as a group. For some, it was a fantastic opportunity to get active, but mainly get wet! We had never heard of this activity before and so there were others who felt slightly timid at the thought of being on a board in the middle of a canal. Japhet (Mata), Kisimba (Kisimba), Louis (Coyne) and myself included were some of those who didn’t fancy the Paddle Boarding trip, simply due to the fear of falling into the canals and with us not being strong swimmers!

Fortunately, the life jackets came to our rescue, which gave the fellas a little bit of courage. It was a challenge for some and Adam, the team physio, was the first to fall off and into the river! After one, two, three and for some, six times (Andy Hollins) falling in the canal, we started to get to grips with the Paddle Boarding. It was a joyful and challenging experience which we all conquered!