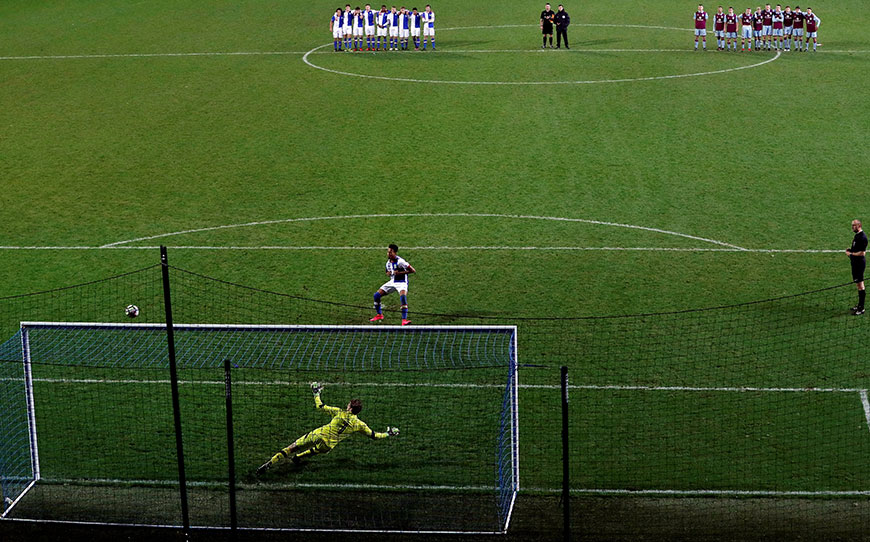 By Owen Keighley: Blackburn Rovers suffered the heartache of a penalty shoot-out defeat as they went down 7-6 on penalties in the FA Youth Cup to Aston Villa on a freezing night at Ewood Park.

Rovers substitute Joel Steer was the man to miss from the spot as last season’s semi-finalists went out.

In an extremely tight game with very little opportunities created, James Finnerty had a glorious chance to give the visitors the lead after 21 minutes when he glanced his header from a corner wide from 6 yards.

And at the other end, a superb point blank save from Viktor Johansson kept out Matthew Makinson’s header from a corner.

Rovers had a couple of chances in the second half. Charley Doyle turned in the box but his shot was straight at Johansson from a tight angle.

Doyle was involved again and had a great chance to score after 76 minutes when he glanced his header just wide of the far post from a corner.

Extra-time proved to be intensely tight with both teams concentrating on making no mistakes.

The best chance of the night fell to Jordan Cox on 102 minutes when a long ball into the box found the winger with time and space, he steadied himself but could only fire straight at Ascroft in the Rovers goal.

Penalties was the only way to split the sides, and the unfortunate Steer fired over to send Villa into the Fifth Round where they will be at home to FC Broxbourne Borough.

Blackburn Under-18s manager, Billy Barr, hopes his side can use this as learning for their development.

“There’s a few of them in tears in the changing room, the manager’s been in as well and the message that’s been given is to learn from it,” he said.

“I don’t watch penalties, I was inside but I’m sure none of them would’ve gone through that before, especially a game of this magnitude.”

“They gave everything, like they do every day, which is their minimum requirement but tonight we just lacked that bit of quality.”