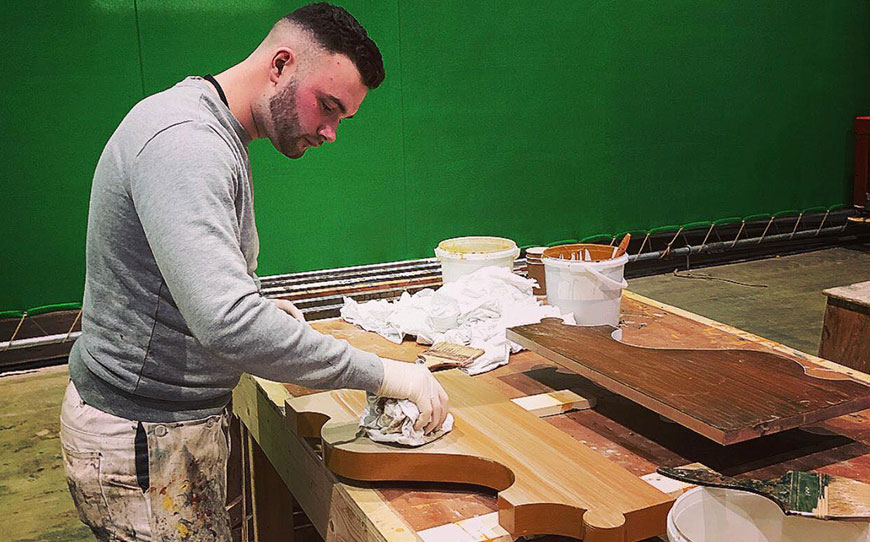 Few apprentices step foot back in the club that released them, unless it’s as a visiting player. Most quickly accept their fate and embrace the experience they had, treasuring their memories, remaining friends with former team-mates and staff.

However, there are a special few that end up going back to work at the club that let them go.

Liam Gooch is doing just that at Luton Town – and working full-time painting the sets of blockbuster movies!

A goalkeeper at Luton from the age of 14, Gooch followed his apprenticeship with a season as a professional before being released in 2017. Two years later, he is coaching young hopefuls at the club in the evening, while spending his days at Warner Brothers Studios in Leavesden, Hertfordshire.

“My dad is Head of Department for painting there, which means he is in charge of the construction crews creating the sets for the films,” Gooch told LFE. “I worked there one summer between seasons on the film Assassin’s Creed and thought ‘I could do this’. It was always in the back of my mind.

“I’ve been doing it for about eight months now. A normal day means getting up at 5am, getting down to Leavesden for about 6, and we start painting the sets around 7.30am. The art director tells us what she wants, then we make samples and once we get the okay we start painting.

“It might be making something look like marble, wood, or another certain texture, anything. We do the backdrops and then a specialist artist comes in to do the detail, like a street for example. The producers prefer a painted set to CGI because not only is it cheaper but also the actors find it easier to perform in front of a set rather than a green screen.”

The 21-year-old is currently working on the set of Cats, the new movie version of the legendary long-running West End musical by Andrew Lloyd Webber, while the Hertfordshire studios have also hosted Hollywood superstars such as Nicole Kidman in The Goldfinch, Bruce Willis in Motherless Brooklyn, and Samuel L Jackson in Shaft. JK Rowling’s Fantastic Beasts, the latest Spiderman movie, and the Oscar-nominated Bohemian Rhapsody were also filmed there.

Gooch even managed to learn an entirely different trade after leaving Luton. He continued: “For 18 months I worked as a chippy. My mate’s dad ran a joiners and I worked there, learning it all, including cabinet-making. It was great. I like to learn on the job. That’s one of the reasons I decided not to go to university.

“I was interested in joining the police at one stage, so was looking at doing Uniformed Services and then applied for Sports Science and Coaching and got offered a place, but that was really just a back-up option as I prefer to be hands on and be paid as I learn a job.

“I’ve gradually learned how to do it and will hopefully work my way up. The pay is good, and it’s pretty cool seeing your work on screen months later. You would be amazed at what the sets really look like close up though – they are nowhere near as neat and clear as they seem on film!” For the first half of this season, Gooch had three jobs. As coach of Luton Town Under-11s and part of the academy goalkeeping coaching staff, he is at the club up to four times a week. That put major pressure on his ability to commit to his third role as keeper for Cambridge City in Evo-Stik Southern League Division One.

Something had to give. “I couldn’t always get to training at Cambridge because of my two jobs,” said Gooch. “I’m at Luton on Wednesdays and Fridays with matches on Sundays, and also do the futsal on a Thursday too sometimes.

“Cambridge were very good about it but the early mornings and late nights were taking their toll on me, I wasn’t coping, so I had to knock something on the head. I’ve taken a break from playing for now. The stress has gone and I’m feeling good again.

“I really enjoy coaching the little ones at Luton, and helping out with the keepers, more than I was playing. But I’m not sure I see myself going into coaching as a career. Ideally, I’ll keep combining it with working in the film industry as that seems quite secure and there always seems to be work there.”

Gooch could be forgiven for looking enviously at two of his old youth team colleagues, but that’s not the case. Frankie Musonda is a squad member at Luton, while James Justin has developed into one of the stars of their Sky Bet League One promotion challenge and been called up by England Under-20s.

“I don’t really see Frankie and JJ as they are gone by the time I come in to coach,” Gooch added. “But it’s amazing how far the club has come on since I was a first-year apprentice.

“The old training ground was a dump really but now the facilities are excellent, the club has an exciting future with the new ground getting planning permission, and it’s a great place to work. I’m quite happy with how things are going now.”