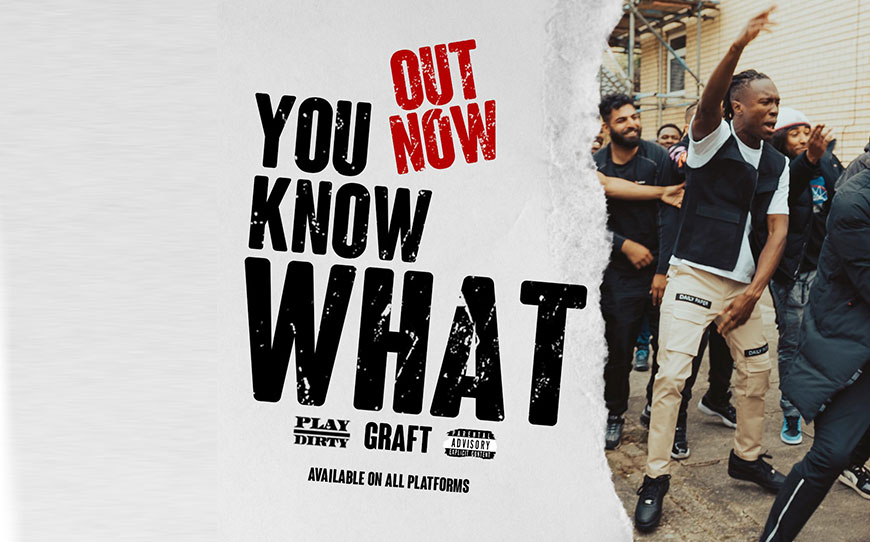 Seven months on, the former Leeds United apprentice is ready to show the world what he is made of with the release of ‘You Know What’, which can be streamed on several music services, including Spotify, Apple Music and Tidal.

“The sound is a jazz-infused drill song,” he told LFE. “The reason I’ve gone for those two sounds is because drill is very current within the UK music scene at the moment, and then I really like to incorporate jazz, live instrumentation and soulful vibes into my music. I wanted to merge myself and drill together and bring out a banger.

“The inspiration behind You Know What is basically just providing a representation of me. I’m going to be in your face, kick down every door and show what I’m all about and what my city is about.“

The 22-year-old, who also spent a season at Rotherham United, gained a reputation for his Caribbean flow and conscious lyrics during the BBC show.

“I’ve maintained those two aspects and I feel like I always will because my heritage and the significance of my lyrics are a part of my artistry and who I am,” said Graft. “You’re going to hear the Caribbean vibe, with the lingo and the slang, and then I always make sure my songs have meaning.

“Krept and Konan gave me the license to do whatever I want with the single, so I’ve been in full creative control through the whole process, from the lyrical content and sound of the instrumental, to the music video location and ideas.

“But whenever I’m with them, or on Zoom meetings or phone calls, they’re always sharing their advice with me, which really helps because I’m still really young and I’m learning as I go along in the music industry. To have their input and advice, knowing they’re just a phone call away, it’s amazing and something that every young artist dreams of.”

The Yorkshire rapper has been busy in the studio this year, with plans for a consistent stream of new singles, freestyles, collaborations and music videos on the horizon for the rest of 2021, while he is also booked in for some festivals in August.

In addition, Sterling has worked hard to add different strings to his bow, taking part in TV adverts, presenting on BBC Three programme MOTDx and modelling for multiple brand partnerships, such as Boohoo and Sports Direct.

“Since winning the Rap Game, life’s been amazing,” he added. “I’ve been in and out of so many places in the UK working on new music, building my network and opening a lot more doors for myself to get my name out there to a wider audience.

“It’s definitely a learning curve to look at myself as a brand, rather than just an artist. I’m still adapting to it because it takes up a lot of time that I would normally be putting into music, but overall, it’s a great experience.

“I feel like music will always be my main focus, but there are other avenues that I can pursue alongside that, where I can make a lot of money and still enjoy what I’m doing. I feel like I can put my hands in as many different pots as possible to learn more, open myself up to more opportunities and just continue to get myself more well known.

“Leaving a legacy is also really important to me. I went back to my old high school, Carr Manor, recently to speak with the pupils and take some photos with them. I was once in their shoes, and if I can inspire the younger generation in whatever capacity, then I feel like I’ll have achieved something truly worthwhile from all of this.”

There was a time when the MOBO Unsung Award 2018 winner was sharing the pitch with current Leeds first-team players like Liam Cooper, Stuart Dallas, Kalvin Phillips and Jamie Shackleton.

Now, his journey has come full circle, having reconnected with the club as a result of his music exploits, which caught the attention of majority owner Andrea Radrizzani.

“I had such a good time at Leeds,” he continued. “Going back is definitely a surreal feeling, especially as things have changed. They’re in the Premier League now, they’ve got new owners and players, so the whole vibe around the club is completely different to when I was there, and obviously now I’m a musician rather than a player.

“I’ve got a really good relationship with the owner, Andrea. He really likes my music; he was watching the Rap Game and has told me he thinks I’m cool and wants to continue working with me.

“He wants to take Leeds to a global level, where they’re known everywhere. He’s incorporating football with music and the entertainment industry as a whole, because that appeals to the younger audience and brings in new fans.

“I’m from Leeds, the football club are doing really well, and we’re sort of growing together, which has made the experience even better, so I can’t wait to see what the future holds.”

In 2017, Graft’s football career hit a brick wall after being released by Rotherham. Four years on, he is making a name for himself in his new profession. Having experienced the process of transitioning away from football, he offered some advice to those currently in the system.

“There are so many transferable skills that can help footballers adapt to any industry,” he said. “The work ethic, discipline and mindset required in football are all factors that I’ve transferred into my music career.

“You learn about the importance of your time, your appearance and the way you act on and off the field, so professionalism is another crucial attribute that I’ve gained from football.

“I’d also say that I developed self-belief. There can be a lot of pressure involved in the journey and you’ve got to retain belief in yourself that you belong and can overcome obstacles. That relates to many other situations in life, not just your career.

“Ultimately, don’t put all your eggs into one basket because you’re not guaranteed anything. You can focus on football while keeping your mind open to other options. It’s important to pursue your other hobbies because it takes the pressure off your football, and then if it doesn’t work out, you’ve already got something else to shift more of your attention and energy towards.”