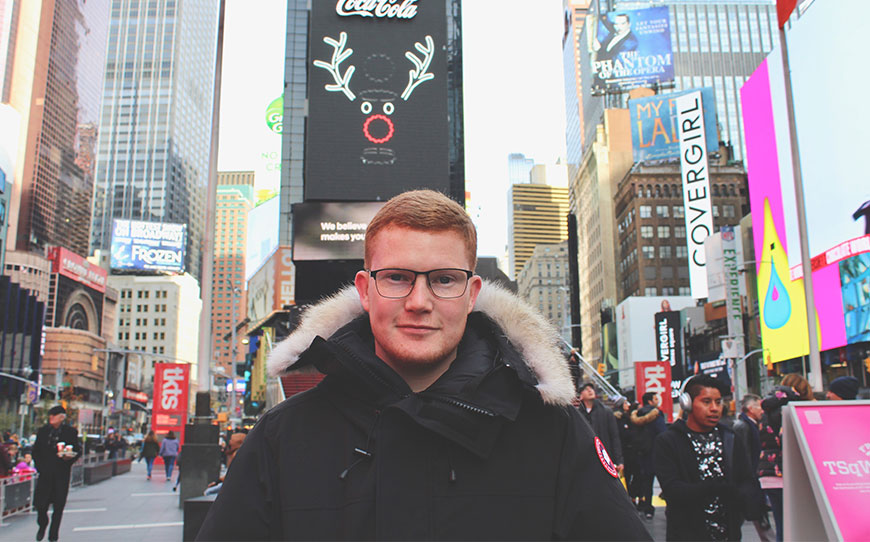 It has been seven and a half years since James Doig completed his apprenticeship at Accrington Stanley.

While he may not have achieved his dream of becoming a professional footballer back in 2013, Doig’s time as an academy player has helped him forge a new life in New York.

The Merseysider’s academic qualifications, alongside his footballing ability, enabled him the opportunity to pursue a soccer scholarship at Quinnipiac University in Connecticut, where he excelled on and off the pitch.

Now 26, Doig has established himself in the Big Apple with his own emerging company, Social Scousers, which specialises in social media management, website and graphic design, photography and videography for its growing list of clients.

“I told my family and friends that I was probably going to go for three months, play the season and then come back at Christmas,” he told LFE. “I thought I wouldn’t be able to cope with the academics because university standard would be too tough for me, so I really didn’t expect to last much longer than that.

“But in truth, I think that footballers have the skills to adapt and be high achievers anywhere. From a young age, we’ve had the discipline to concentrate for extended periods of time, organised exercise and nutritional regimes, listened to instructions and executed them, worked on developing technique and problem-solving in various scenarios.

You sacrifice a lot and work a tremendous number of hours to get to the apprenticeship level, so without even knowing it, you’ve built up an array of skills that can be transferred into any number of different areas.”

Despite having doubts over whether he would settle in the States, Doig was immediately made to feel welcome and quickly lost his inhibitions.

“I flew into New York and straight away I was greeted by the coaches at the airport,” said Doig. “They took me to a treatment room to do a fitness test and I even had a press release announcing my arrival, so I was really surprised about how seriously they took it.

“All in the first week, I met with a dietician telling me what I should be eating, I was given a gym and nutrition programme and I was made aware of a service that I could contact if I needed a sport psychologist.

“For matches, we’d all travel together in a coach or a plane and stay in hotels and have our food catered for us before and after games, which just shows how much funding they put into it.”

The Brit abroad was also complimentary of the high standard of play, with athletes from all over the globe competing for team and individual prizes at the college level.

“One of my close teammates was a lad from Brazil and he was a fantastic player,” Doig continued. “He explained that the opportunity to play at amazing facilities and have his academics covered in the U.S. was far better than turning professional in Brazil, and that’s the case for many of the foreign guys.

“We had players from 13 different countries from all over the world. There are many conferences and they’re balanced in terms of budgets, so it’s all very competitive and every game matters.

“They do a lot of individual awards and I wanted to win them. It sounds a bit vain, but I wanted to have the media coverage and I wanted everyone at the university to know who I was.

“It was crazy to walk around the campus and people know who you are as if you’re some sort of celebrity. Students would create signs in the crowd and chant your name; I loved that experience. The banner that really stood out for me was one that said: ‘Teach me how to Doigy’ – that was a good one.”

The Accy academy graduate was part of the first ever Quinnipiac side to reach the National Championship during his freshman year, and went on to pick up several individual honours, as well as concluding his career with the most wins by a player in the university’s history.

And it was not just on the pitch where Doig thrived, with his commitment to education leading to him finishing on the Dean’s List for his Master’s degree, which recognises academic excellence.

“They call you a scholar-athlete because the education comes first,” he said. “To remain eligible to play soccer, you need to maintain a 2.0 grade point average.

“I remember one of my first lessons, I rang home and was buzzing that I’d got the equivalent of a C, so to end up finishing on the Dean’s List and getting a 4.0 GPA, which is basically straight As, was fantastic. I was driven and a leader as a player and took that into the academics.

“Each team must meet a certain GPA to be eligible to play and I prided myself on being a ‘GPA player’ that helped keep our levels high as a collective. In my freshman year, I was being bailed out by others, so that was important to me to turn that around and set the standard.

“Some kids will come over and know exactly what they want to do, but if you don’t then their system accommodates you as you’re able to try all sorts of different classes before deciding your major. I was undeclared for the first year and a half and I was able to try a variety of different courses before electing Communications.

“The school and the coaches help you every step of the way. You’re given study hours for extra support and we had our own tutors and academic advisors if we needed them. All of that guidance helped me to excel.”

Although the ex-Quinnipiac captain had offers to continue his playing career in Sweden and Iceland, Doig decided he was ready to pursue his next pathway.

Following internships at AC Connecticut and New York Red Bulls, he began blogging for officially licensed Liverpool FC retailer The Anfield Shop, which was the catalyst for developing his own company.

Doig added: “I hadn’t done any blogging before, but I took the position and hoped that I could find my way. It wasn’t long before I was pointed in the direction of someone who needed help with their social media accounts, then a football club got in touch asking if I could help them and before I knew it, I was building a clientele and running a no-name business.

“I started hiring people to do jobs for these different people and organisations, and all my project management and education was at the forefront of what I was doing. After about 18 months running social accounts for various football clubs and retail companies, I decided to put a brand on it and push it forward, which is where I developed Social Scousers.

“The team is made up of three full-time staff, but then a lot of work is done via freelance. We focus mainly on social media development for companies of varying sizes. We develop an online presence for them and give them an understanding of how the marketing side can help them.

“We’re working in many industries, such as sport, retail, music, plumbing and labour. With the pandemic, a lot of companies have been unable to meet face-to-face with people and they need to focus more of their efforts on connecting and engaging with their customers and audience online.

“Due to the fact it’s an online business, I’m able to have clients back in England as well, so I’m looking to grow the company both over here in the U.S. and back home.”

It may not be the route he was visualising as a 16-year-old starting his football apprenticeship, but Doig is now relishing his new challenge and plans to progress his academics even further.

He said: “In hindsight, I’m so grateful for the education that ran parallel with the football during my apprenticeship. When I decided I wanted to go to the States, I needed the required education to make me eligible, so it was very valuable to my transition.

It’s okay to be sceptical about it. I came over thinking I’d give it a go for three months and come back, but look at me now. I’ve just bought my first home in Long Island and I’m building a business with long-term ambitions to stay here.

“I also hope to continue my education by studying a PhD. I often think: ‘how have I done this?’ I want to keep doing that. I want to keep surprising myself and pushing the boundaries that I’d previously set for myself.

“I definitely took a risk coming here, but it was a risk worth taking. I developed leaps and bounds on the pitch as I was given a new injection of confidence and had all the guidance and facilities to improve my lifestyle and performance.

“On a personal level, I was forced to mix with people from all over the world and find my way in a completely new country, plus academically I was learning in all sorts of areas, so combining all that has really helped me to grow.”