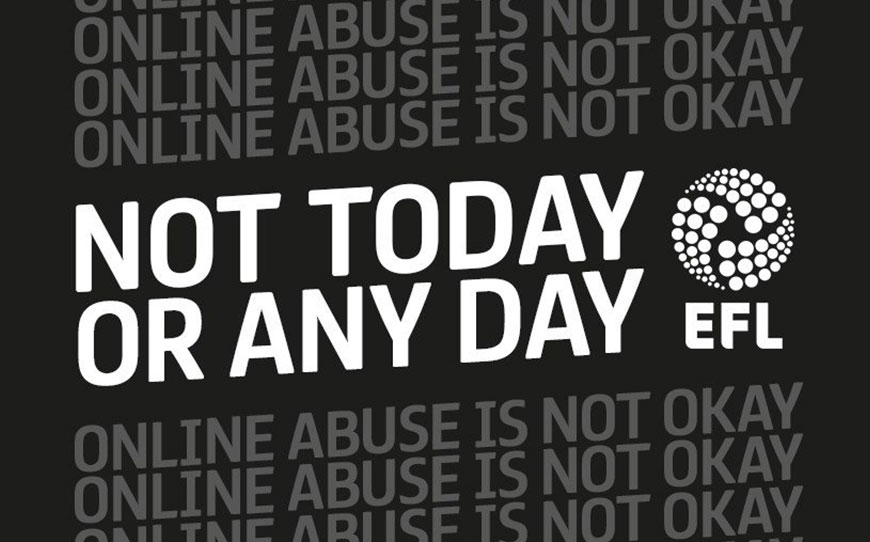 League Football Education will unite with The FA, Premier League, EFL, FA Women’s Super League, FA Women’s Championship, PFA, LMA, PGMOL, Kick It Out and the FSA for a social media boycott from 15:00 on Friday 30 April to 23:59 on Monday 3 May, in response to the ongoing and sustained discriminatory abuse received online by players and many others connected to football.

As a collective, the game recognises the considerable reach and value of social media to our sport. The connectivity and access to supporters who are at the heart of football remains vital.

However, the boycott shows English football coming together to emphasise that social media companies must do more to eradicate online hate, while highlighting the importance of educating people in the ongoing fight against discrimination.

In The EFL’s letter of February 2021, English football outlined its requests of social media companies, urging filtering, blocking and swift takedowns of offensive posts, an improved verification process and re-registration prevention, plus active assistance for law enforcement agencies to identify and prosecute originators of illegal content.

While some progress has been made, this latest campaign reiterates those requests in an effort to stem the relentless flow of discriminatory messages and ensure that there are real-life consequences for purveyors of online abuse across all platforms.

Boycott action from football in isolation will, of course, not eradicate the scourge of online discriminatory abuse, but it will demonstrate that the game is willing to take voluntary and proactive steps in this continued fight.

Trevor Birch, Chief Executive of The EFL, said: “EFL clubs have expressed a clear desire to take a united stand against abhorrent racist, discriminatory, and threatening abuse on social media platforms which we fully support alongside the rest of the football family.

“While we recognise the value and role social media plays in our game, online abuse will not be tolerated and we will continue to strongly pursue all avenues open to us to affect change.

“The boycott is only part of the work being undertaken in this area but further highlights the need for social media companies to take additional responsibility for the inappropriate and unwelcome behaviour that appears on their platforms.”

Kick It Out Chair Sanjay Bhandari added: “Social media is now sadly a regular vessel for toxic abuse. This boycott signifies our collective anger at the damage this causes to the people who play, watch and work in the game. By removing ourselves from the platforms, we are making a symbolic gesture to those with power. We need you to act. We need you to create change.

“We need social media companies to make their platforms a hostile environment for trolls rather than for the football family. We need the Government to hold its nerve and keep its promises to regulate. The Online Safety Bill could be a game changer and we aim to help make that happen. There should be no space for hate and everyone can play their part. If you watch, work in or love the game, join in.”