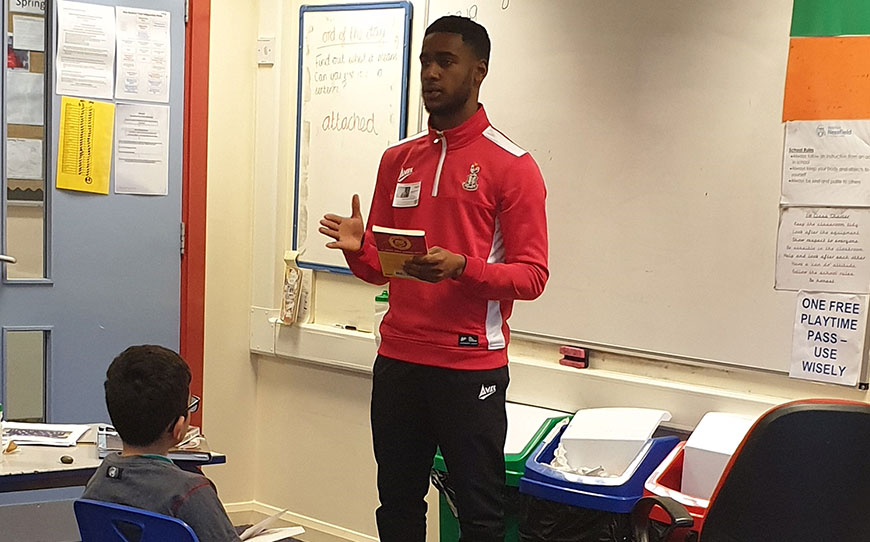 It has been a season to forget for Bradford City, who lost their Sky Bet League One status after sacking two managers and being rooted to the bottom of the table.

However, second-year apprentice Raeece Ellington has provided an air of positivity by visiting primary schools across the local area to read to young students as part of a scheme led by the National Literacy Trust, a charity working to improve literacy through various community projects.

The 17-year-old volunteered to become a youth ambassador and has used his spare time to read ‘Roy of the Rovers’ stories, as well as teaching valuable life skills.

“When I was younger, I regularly worked with kids doing coaching and things like that and I really enjoyed it,” Ellington told LFE. “When the opportunity came up to read to kids, I thought they could really benefit from it and it can encourage the kids in those areas to stay out of trouble, as well as helping with their literacy. If it can help them and also benefit me, then it’s a great thing to do.

“I think it develops maturity when you take on different tasks and become more independent and show that you can handle it. I’ve become more confident and it puts me in an uncomfortable position to become better as a person.

“Roy is in school and he plays with an Under-16 team and it just discusses his journey. I can link it to my own experience because it contains all the key aspects, from playing in Sunday League to playing in youth teams to getting signed.

The kids really like the journey that they go on and I show them how being in school benefits them. We talk a lot about resilience and discipline.

“I ask them for examples of how they’d use resilience for their primary school work, so that’s things like answering a question wrong and being able to handle that and work towards the correct answer.

“Then I relate it to football, so if I’m not resilient then I can’t overcome challenges like getting better at my technique or recovering from an injury. I really try to instil those key words into their thinking.”

The Bantams teenager has enjoyed a successful apprenticeship, achieving the Extended Diploma and progressing into the first-team having earned a senior debut in the Checkatrade Trophy against Oldham Athletic in October.

Ellington believes his community work has been a major factor in inspiring him to develop on and off the pitch.

“It really motivates me because if I do well in football then the children will be able to say ‘he used to read books to us’, so it pushes me to want to do better and be somebody,” he said.

“As footballers, children look up to you and want to be like you. In my talks, I mention Muhammad Ali and how much of a character he was and that being a role model isn’t just based on your ability as a footballer or a boxer or a singer, it’s also the traits they have as a person and how they come across as a character.

“A lot of the kids are from the local area and support Bradford, so when I come in their eyes are beaming and some of them remember my name from past sessions, so it’s great that they seem to really enjoy it and engage with it.

“It also presents the club in more of a positive light. Obviously, the first-team haven’t been getting the best results this season, so me representing the club by doing this sort of thing can focus on the positive things that the club are offering.

“After the sessions I get a bit of feedback and I ask the kids whether they’re going to read their books and whether they’re going to take on board my messages and a few of them have responded saying ‘you’re my new role model Raeece’. To be able to give them advice and give a bit of an insight of what it takes, it feels like I’ve got a responsibility to help and pass on the knowledge I’ve gained so far.” A knee meniscus injury has sidelined Ellington for the final few months of the season, but he insists he has maintained a healthy mental state due to his primary school commitments.

“Players when they’re injured can feel quite lonely, especially if it’s a long-term injury,” he added. “Having this each week has given me a purpose while I’ve not been able to get out on the pitch. The injury has actually helped my speeches really because it shows that anything can happen and you have to be resilient in order to bounce back from setbacks.

“I sit at home and think about the reaction of the children and some of the things they say to me and it feels great to think that I’m having a positive influence on them. I can take that into my football, being confident enough to express myself and have a conversation with the manager, and also moving into another job in the future, whenever that will be.

“I live just with my mum, so we don’t have as much as some families. I’ve always wanted to give back to my family and also help other families in places that are less privileged. Charity is an important thing in my religion as well, so I think it’s something that I can do to help people and maybe I can be that person for them where they think ‘he’s done it, so I can do it too’.“

Ellington’s faith is another important aspect to his life away from the game, which also offers transferable skills that can aid his footballing ability.

He said: “I put a lot of time into my religion. I pray five times a day. Maybe a few years ago it wouldn’t have been so easy, but nowadays there are more Muslim footballers and clubs have more of a modern culture, so I’m able to fit in the time around my schedule to practice my faith.

“Religion definitely teaches me discipline – staying strict with my time and sticking to a routine and also putting the right nutrients in my body. These sort of skills will hopefully help to take me where I want to be.

“We’ve had talks at the club about finances and been given warnings about how easy it can be to get caught up in destructive things. Being a Muslim, it teaches you to stay away from gambling and alcohol, so that’s another area where the discipline involved in my religion has helped to prepare me for a future in this sport.

We’ve had equality and diversity sessions and they’re really helpful. If people are educated then they have a better understanding of things and are more likely to think about their actions and the words that they speak. The more it’s instilled into the younger players then the quicker it’s going to be eradicated and it’s good to come through in a culture that’s willing to tackle these issues.”

Despite his achievements as a player and student, Ellington did not receive a professional deal at the completion of his apprenticeship. Although he is unwilling to give up on his dream just yet, the talented youngster already has additional options in mind.

“I like having other interests and learning about things instead of just concentrating on football all the time,” he continued. “I’m looking to do an English degree in Language. I’ve also been looking at a Sport Psychology course at Manchester University, so I’m just keeping my options open between either being a full-time student or learning alongside being a player.

“Although football is important, it’s not your life. Having other things and taking them seriously will help you stay more relaxed and actually helps my focus on football because I have that time to switch off so that I can recharge mentally.

“We’ve had people come in and stress the importance of education, not just as a backup but to go alongside football. You can use it after football or use it to gain two separate incomes during your football career, so it’s become more important over the two years as I’ve become more aware of the benefits.

“I have ambitions to own a business in the future and you can’t achieve that without having qualifications and having a thirst for learning. You need the confidence to put yourself out there and earn opportunities to build experience.”